Military hotels that served meaty meals to soldiers and working class opened in Bengaluru towards end of 19th century; they are popular among foodies

BENGALURU: When a non-native imagines a typical meal in Bengaluru, several varieties of crispy dosas, fluffy idlis and unlimited vegetarian meals may come to mind. However, another variety of local food can be found hidden in the bylanes of the city, and though ancient, it is still widely popular. We’re talking about the hot, spicy and meat-heavy food found at the city’s many ‘military’ hotels.

One mustn’t confuse these military hotels with army canteens and messes, as these are privately owned establishments that have been around in the city for decades, some even crossing the century mark.  From paya soup to biryanis, mutton chops, kaima balls and the Karnataka staple ragi mudde, the owners of these establishments have carefully guarded their ancient, secret recipes, which have been passed down from generation to generation. Earlier found in older parts of the city like Cantonment and Pete, these eateries have now migrated to others areas. Some have even gone from being the hole-in-the-wall, bar neighbouring joints they once were, to sit-down spots with plastic chairs and cutlery, all the while retaining their affordable prices, hearty portions and old-world charm.

Soldiers to blue collared?
So how did these non-veg specialists thrive in a city/state that was predominantly vegetarian?  There are a few theories as to how these eateries first popped up. Arun Prasad, a city-based independent historian says that there isn’t much evidence on the exact origin of military hotels, but that they definitely are over a century old. “The origins of military hotels can be traced back to British times. The Indian soldiers, even the Hindu ones, were given meat (and alcohol) in the army to help maintain their physiques, after which they had developed a taste for non-vegetarian food. When they returned to their native villages, they would’ve started these eateries serving meat for their own needs, which is the most credible theory as to how military hotels started. This also draws a connect as to why they are called ‘military’ hotels as well ,” says Prasad.

Interestingly, today, these eateries, which open as early as 5.30am serving hot non-vegetarian food, cater predominantly to the working class, says Ruth D’souza Prabhu, a food writer. “The working class is their target audience — food is quick, cheap and for someone with a good appetite. They need a hearty meal early in the morning to sustain them through the day, which is why they open early. A tradition which can perhaps be said to have been carried down from Tipu Sultan’s time, when soldiers needed to eat something heavy in the morning to prepare them for the day,” she says.

Another theory takes us back to when the Marathas, lead by Shahji Bhonsle, and the Bijapur army captured what is currently known as Bengaluru from Kempegowda. The Bijapur Sultans then gave the Marathas the city as a gift for their support during the siege, which is how the Maratha population began to grow in Bengaluru. These Maratha families lived in the Pete area, and they started these military hotels. “This theory, while popular, doesn’t have much credence, mainly because some of the families that have been running these hotels for years and years aren’t necessarily of Maratha descent.

Take for example Gowdru Military Hotel (Indiranagar) or Naidu Military Hotel (Kailasipalyam),” says Prasad. A third theory, as told to us by Prabhu, claims that Bengaluru was hit by the plague in the 1800’s, and non-vegetarian food was given to the ill to help them regain strength — again, this is speculative. Unfortunately, most of these eateries shifted from their original locations or were renovated over the years, giving us a lack of insight on architectural styles. However, regardless of how popular, these eateries have maintained their rustic, minimalistic approach towards ambience.

While similar joints can be found in Tamil Nadu and Andhra Pradesh, most go by ‘Non-veg Hotel’ or ‘Non-veg Mess’. This ‘military’ prefix is something unique to the state, while in Kerala, military hotels as a concept do not exist. The reason being, says Prasad, is due to the presence of the Christian community that made meat eating something not out of the ordinary, hence they didn’t need a special name to announce that non-vegetarian dishes are on the menu. Almost all the military hotels are shut on Mondays, this is mainly for religious reasons

Rustic, home-style food
Rajiv L, third generation of his family to run the popular Shivaji Military Hotel in Jayanagar eighth block along with his brother Lokesh, says that the siblings prepare the food themselves in order to protect their family’s precious recipes. “I have some documents from my grandfather, S Mannaji Rao’s time, which date the origins of this hotel back to 1908. We prepare food in the Maratha style, with the mutton biryani and mutton chops being the most popular items on the menu,” says Rajiv, adding that they did consider staying open for dinner, but discarded that idea fearing that they would have to deal with a lot of drunk people looking for cheap, hot and spicy non-vegetarian food.

In the other military hotels as well, guarding recipes is of utmost importance, adds Prabhu, citing the example of Ranganna from Ranganna Military Hotel in Jayanagar. “My personal favourite is Ranganna Military Hotel, where the Thale Mamsa (head meat) Fry and Mutton Biryani (which is technically a pulav rather than a biryani) are very popular. Ranganna goes himself every morning to buy supplies, and handpicks every piece of meat as well,” she says.  She adds that if the prefix ‘Hindu’ is found in the names of these hotels, it is to make clear that beef and pork aren’t served there.

Sohan Shoney, a city-based food photographer, says that his favourite military hotel in Bengaluru is Shivaji, and that the Kaima Balls, Mutton Chops and Donne Biryani are his top picks there. “Military hotel food is in a different league altogether. The dishes are low on spices, high on fire and several parts of the animal are used, such as the liver, head, and trotters — which is not found on most menus. While the types of dishes are similar across the hotels, the styles of cooking vary depending on where the family has its roots,” he says. 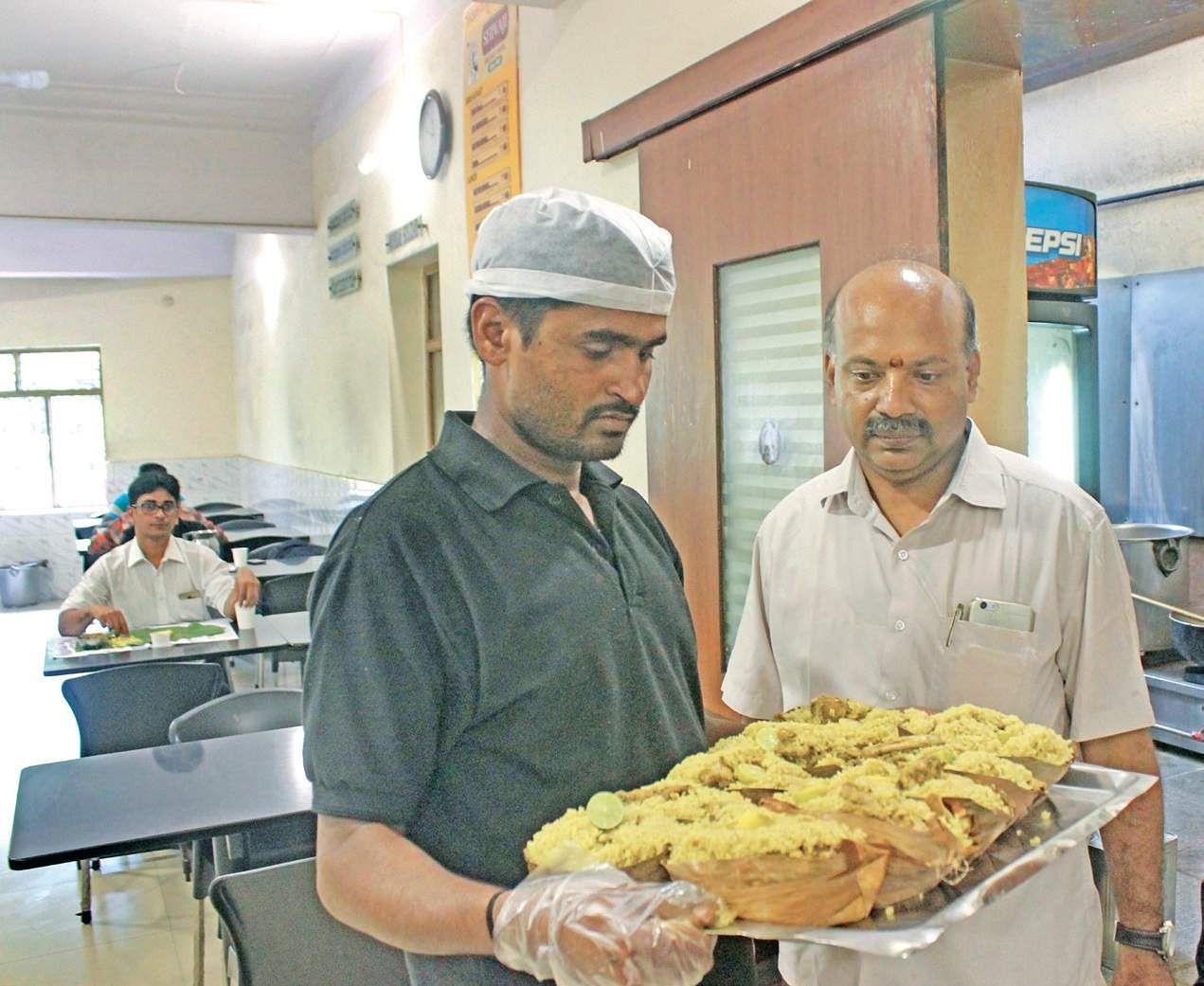 Earlier, all the military hotels would cook on wood fire, but now, most, barring Shivaji, have shifted to gas stoves. You won’t find any of these hotels using packet masalas, as they continue the tradition of mixing their own. Talking about the popularity of this food even today, Prabhu says that a lot has to do with the advent of the ‘foodie’ culture and social media. “We have started rediscovering these spots, which our grandfathers probably frequented, due to it suddenly becoming hep or cool. In fact, some of these joints have started serving dishes like Chicken Chilly and Chicken Leg to cater to the younger generation that has just now discovered them,” she says, adding that best part about eating at a military hotel is the tumbler of hot rasam served at all of them at the end of the meal.