BENGALURU: Rain, apathy of civic agencies and unscientific construction of roads are all blamed for poor condition of roads that greet motorists after a short spell of rains. Among the factors that are not held to account for poor quality roads are the number of vehicles plying in the city.

Experts, who acknowledge the impact of traffic on the wear and tear of roads, believe that increasing the load factor of roads will go a long way in extending their durability. Blaming unscientific construction of roads for the perennial problem, they say that using ‘anti-stripping’ agents will also help in  maximising the life of roads.

Speaking to Express, H S Jagadeesh, professor of Civil Engineering, BMS College of Engineering, said that load factor was among the important aspects that lead to damage or quick wearing out of roads. “Damage occurs when load factor of a road is more than what is permitted legally, as per standards of the Indian Road Congress,” he said. Blaming trucks as the main cause of excess load factor on roads, he cited Outer Ring Road as an example for the impact  of load factor on road durability.

The road, he said, was like any other civil structure. “If a five-storey building is constructed  with pillars only sufficient for a two-storey building, the structure will neither be sound nor safe. A similar analogy can be used for roads, which suffers damage when massive vehicles ply a road that are designed  to take less load,” he said.

Amarnath M S, chairperson, Civil Engineering department, University Visvesvaraya College of Engineering, said that vehicle demand to capacity ratio also had a role to play. “If  volume of traffic increases, there are more repetitions of vehicular movement on a particular stretch of road, speeding up the deterioration  of roads,” he said. He said that movement of cars and bikes had relatively lesser impact on roads, compared to commercial vehicles.

Somashekar S, Chief Engineer (Major Works), Bruhat Bengaluru Mahanagara Palike, said that increase in number of repetitions (of vehicle movement) on roads and unscientific construction of old roads were among the factors that damage roads.

The dimensions of Kempegowda Road has remained the same for at least a century, despite the pace at which the city has expanded. In some places, roads have been laid over mud-roads and was not scientifically constructed from the base, he said. On the volume of traffic, he said despite the rapid increase in volume of traffic in the core areas of the city, road width has almost remained the same during  the period.

How to make roads last longer

With water being the main  ‘enemy’ of bituminous roads, there are plans to apply anti-stripping agents on roads to make them last longer irrespective of the weather. According to a source, irrespective of how well roads are constructed, surface damage occurs on a daily basis. “Therefore, we are discussiung measures to use anti-stripping agents while constructing roads in the future. It is not very expensive and ensures durable roads,”  the source added. 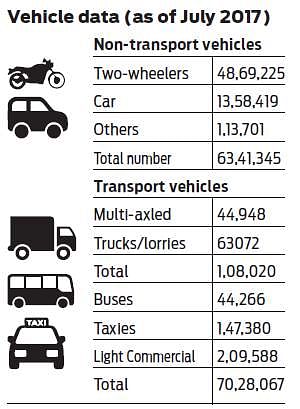