Vishal’s gang wanted to free Sharath, but he insisted on murder to protect their identities

BENGALURU: Ten days after he was kidnapped for ransom, the body of 19-year-old Sharath N was recovered from near a lake on the outskirts of Bengaluru. The mastermind behind the abduction and killing of the diploma engineering student was his former schoolmate and friend, Vishal HP. Shockingly, while Vishal’s associates in the abduction plan wanted to free Sharath, it was Vishal who insisted that he must be killed to protect their identities. 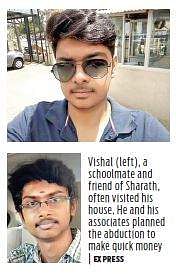 The murder was executed on the very night that Sharath was kidnapped. Vishal had been visiting Sharath’s house to keep track of the police investigation and also mislead the family. Vishal and three of his partners in the crime, all in their 20s, have been arrested, and the police are looking for Shanthakumar, a cab driver.
Sharath, son of income tax official Niranjan Kumar Nair, was abducted on September 12. He had told his family that evening that he was going to show his new motorcycle gifted by his father to his friends but never returned. That night he sent a WhatsApp video from his mobile phone to his parents, saying he had been abducted and that the gang wanted Rs 50 lakh as ransom.

Police investigating the case detained Vishal (21) on Thursday on suspicion, and he led them to Karan Pai (22), Vinod Kumar (24) and Vinay Prasad (24). On questioning, they confessed to strangling  Sharath and burying his body. The body was exhumed from near Narasimayya lake, Ramohalli, 35 km from the city.

Police said even if ransom was paid, Sharath would have been killed.  Vishal, an RTO agent and student at an evening college , was close to the family. He often visited Sharath’s house and knew that the family was affluent. Vishal wanted to help his brother-in-law Shanthakumar, who was in financial trouble, and had even taken a Rs 4.5 lakh loan. To make quick money, Vishal, Shanthakumar and the three others hatched the kidnap plot. Vishal was also in love with Shanthakumar’s sister, police said. During interrogation, Vishal told police he had never thought Sharath’s parents would seek police help.

Chandru, a relative of Sharath, told Express that the boy left the house on the bike at 6.10pm on Spetember 12. At 6.30pm, he was kidnapped and around 8.30 pm his mother Vanaja tried to contact him over phone but he did not respond. Twice he texted her that he would reach home soon.Normally, he would send text messages to his mother, addressing her as “Amme”, but it was missing in the the last message sent from his phone at 8.30pm that stated he would reach home at 10.30pm. A worried Vanaja texted back saying she would inform police if he did not come home soon. At that time, she was not aware that her son was abducted.

Sharath’s mother Vanaja  was in for a shock when she received three video clips from his phone, two in Kannada and one in Malayalam. In the video, Sharath told his parents that he was abducted and asked them to give Rs 50 lakh ransom for his release. Family immediately filed a police complaint. After a while Vishal also joined the family. As Vishal was around with the parents, police did not initially suspect him. He asked his gang to kill Sharath as he would reveal their names if released. He made the calls over WhatsApp to evade possible monitoring of call records. When police detained him on Thursday, Niranjan even tried to stop them.

During visits to Sharath’s house, Vishal tried to mislead the family and police. He would tell Sharath’s father that police were not probing the case properly. He also tried to point needle of suspicion at their driver Mahadeva and also some neighbours, who were taken into custody and grilled by cops.