Founder/owner of Cafe Coffee Day group, V G Siddhartha is likely to appear before Income Tax officials within the next two days.

BENGALURU: Founder/owner of Cafe Coffee Day group, V G Siddhartha is likely to appear before Income Tax officials within the next two days. This is after Income Tax sleuths discovered concealed income of the businessman “exceeding Rs 650 crore”, after his properties were raided on September 21.
Sources in Income Tax Department said Siddhartha has been summoned for questioning, as investigating officials suspect that the businessman has hidden several sources of income, leading to tax evasion. Officials are still analysing the documents seized during the raid on about 25 properties in different parts of Karnataka, Chennai and Mumbai. 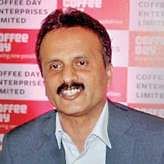 In a statement issued on Sunday, the Department said that there were a number of issues highlighted by officials following the raid on Siddhartha, which included violation of I-T statutes, that amount to tax evasion. “....relevent evidence has been found...these will be pursued effectively..” the statement had read.
Sources said that it was part of the investigation to summon the person who has been raided by I-T officials. Siddhartha may appear before officials either on Tuesday or Wednesday.

Stay up to date on all the latest Bengaluru news with The New Indian Express App. Download now
(Get the news that matters from New Indian Express on WhatsApp. Click this link and hit 'Click to Subscribe'. Follow the instructions after that.)
TAGS
V G SiddharthaCafe Coffee DayIT raidCCD owner