DJ Halli ward corporator likely to be city’s next mayor

Congress corporator R Sampath Raj (49) representing Devarajeevanahalli ward in Pulakeshinagar Assembly constituency will in all probability be the next mayor of Bengaluru.

BENGALURU: Congress corporator R Sampath Raj (49) representing Devarajeevanahalli ward in Pulakeshinagar Assembly constituency will in all probability be the next mayor of Bengaluru. The Bruhat Bengaluru Mahanagara Palike mayoral election is scheduled for Thursday. This year, the mayor’s post has been reserved for an SC candidate while a woman from general category will be deputy mayor.

Second-time councillor Sampath Raj and three-time councillor L Govindarju from Subashnagar ward in Gandhinagar Assembly constituency are in the race, but S a m p a t h seems to enjoy the backing of city MLAs and ministers. A s e n i o r Congress leader said Sampath has the support of ministers and MLAs including Energy Minister D K Shivakumar, Bengaluru Development Minister K J George and others, while Govindaraju has KPCC working president Dinesh Gundu Rao’s support.

“The chances of Sampath being elected mayor are more,’’ said the leader who did not want to be named. The opposition party in the Council, BPP has also decided to field its candidates for the posts of mayor and deputy mayor. However, the candidates are yet to be finalised, said party sources. In 2015 election, BJP won 100 seats, Congress 76, JD(S) 14 while independents won seven seats. One independent is supporting BJP. Though BJP has simple majority in the Council, MLA, MLCs and MPs too have voting power for the mayoral elections. Taking this into account, Congress- JD(S) coalition has more numbers. Intially, though JD(S) demanded the mayor’s post, later it settled for chairpersons of a few Standing Committees.

Sources in the KPCC said a series of meeting will be held at the party office. “On Tuesday, it was with BBMP councillors and on Wednesday it will be with city MLAs and ministers where ministers Ramalinga Reddy, K J George, Roshan Baig, Krishna Byregowda, M R Seetharam and others are expected to attend. The same evening, a meeting will be with KPCC president G Parameshwara and Chief Minister Siddaramaiah.

The candidate will be finalised by Wednesday night,’’a source said. Sampath, who runs a group of educational institutions, said he is an aspirant for the mayor’s post. “I am a two-time councillor and my leaders have been watching my work. DJ Halli ward is one of the backward and is being improved. I will be happy to serve the city,’’ he said. Sampath is an engineering dropout.

“I have been associated with Congress for 30 years. I was the Youth Congress Secretary and have served the party in various capacities. I hope they will give me the opportunity,’’ he added. Sources in KPCC said George is keen on a mayor from Bengaluru East which DJ Halli is part of. “George, who is also part of Bengaluru East, wanted a mayor from that part of the city,’’ a source said. “In Congress, we go by seniority. Sampath Raj is a second-timer and he has been with Congress for long. Govindaraju is third- time councillor, but he is from JD(S),’’ a source added. 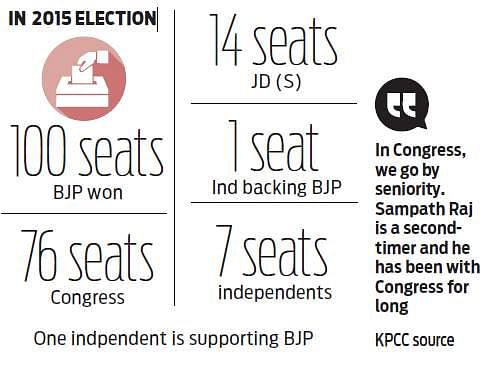