Compelled to contest from a suitable constituency in northern Karnataka in the 2018 Assembly election, BJP state president B S Yeddyurappa is likely to enter the fray from Terdal constituency in Bagal

BENGALURU: Compelled to contest from a suitable constituency in northern Karnataka in the 2018 Assembly election, BJP state president B S Yeddyurappa is likely to enter the fray from Terdal constituency in Bagalkot district. 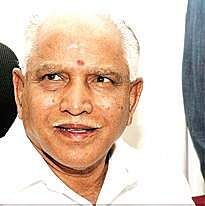 Yeddyurappa is set to give up his Shikaripura constituency to his son B Y Raghavendra in accordance with party national president Amit Shah’s  strategy to get him to contest from a northern Karnataka constituency to retain the party’s Lingayat vote bank in the face of Congress’s efforts to woo the community by supporting their demand for a separate religion tag.

Party strategists expect BJP to make significant gains in northern Karnataka by fielding Yeddyurappa from that region. Terdal, bordering Vijayapura and Belagavi districts, is being  seen as an ideal constituency which will create a ripple effect in three districts for BJP with Yeddyurappa contesting from that seat.
The  constituency, which is presently represented by Women and Child  Development minister Umashree, has huge presence of Lingayat and  Nekara (weavers) communities.

Stay up to date on all the latest Bengaluru news with The New Indian Express App. Download now
TAGS
B S Yeddyurappa