Rough ride ahead at silk board

Average speed of vehicles on Silk Board-Eco Space stretch is likely to touch as low as 2-3 km per hour in the coming months as Metro works progress.

BENGALURU: Those travelling to work via Silk Board will have to brace for longer hours of commute every day, with the BMRCL starting works for expanding the Metro between Rashtreeya Vidyalaya station and Bommanahalli. 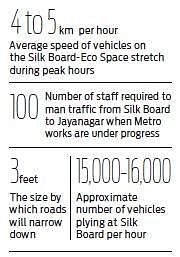 At present, the average speed of vehicles on the Silk Board-Eco Space stretch is estimated at 4 to 5 km per hour during the peak hours. This would further come down by another 2-3 km in the coming months as the Metro works progress, according to traffic officials in the city.A report highlighting this issue will be discussed in the next meeting involving senior traffic officials of Bengaluru, a traffic official told Express.
The report speaks about the anticipated slowdown of traffic and seeking more manpower to regulate traffic.

“There would be a requirement of at least 100 staffers to man traffic from Silk Board to Jayanagar when the works are under progress. We will request BMRCL to depute employees,” the official added.
Further, the roads will narrow down by at least 3 feet, making it impossible for HTV vehicles to ply on Silk Board-Jayanagar stretch. “We will explore an option with BMTC to introduce mini buses instead of regular buses. Some alternative routes for traffic diversion are also under consideration,” the official added.

Earlier this year a study undertaken by Consortium of Traffic Engineers and Safety Trainers (CTEST) had shown that vehicles moved only at 4-5 km/hr during the peak hours in the evening on the Silk Board-Intel office (Eco Space) stretch.

“Silk Board is already exceeding its capacity. Some 15,000-16,000 vehicles ply here per hour,” CTEST founder president M N Sreehari said. He added that unless the traffic officials had a plan, the junction will turn more chaotic with the Metro works.BMRCL expects to finish works on this stretch by 2020. The work involves a 6.34km elevated corridor with five Metro stations en route. When contacted, Additional Commissioner of Police (Traffic) R Hithendra said it is too early to comment.They will be able to come up with accurate measures only after BMRCL gave the traffic officials a plan of work (which typically included a traffic management plan during the construction), he said.

Stay up to date on all the latest Bengaluru news with The New Indian Express App. Download now
TAGS
vehicles speedSilk RoadRough ride