Always packed to the full and spilling over, this joint has retained its pride of place beating off  the challenge of posh eateries.

BENGALURU: This eatery in one of the busiest areas of Bengaluru — Gandhi Bazaar  — has flourished due to its mouth-watering Dosas and a dollop of butter on it, an old-world charm and a loyal following over seven decades and more. This year, Vidyarthi Bhavan celebrates its 75th year of tradition, consistency and its simple but irresistible menu of Dosas, Idlis, Pooris and Vadas. 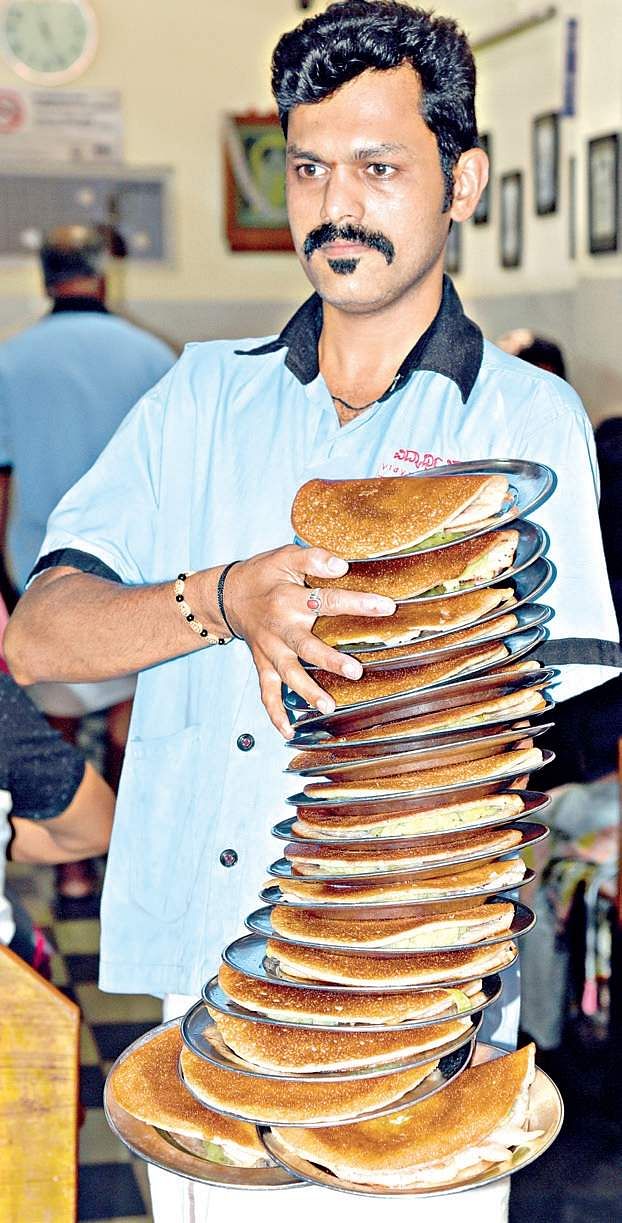 Walking into this iconic restaurant today, you will find the same ambience, with sketches of who’s who of Karnataka adorning the walls, the heritage menu and the charming service. Equally iconic is its waiters balancing a dozen or more Dosa plates effortlessly and serving them to patrons with a smile.
Located on a small premises, this place is all hustle-bustle since early morning and the charm remains throughout the day. Always packed to the full and spilling over, this joint has retained its pride of place beating off  the challenge of posh eateries.

In 1943, when the Ural brothers (Venkataramana and Parameshwara), hailing from Kundapura of Udupi, started this hotel, little would they have imagined that 75 years later it would still command the same following and serve as a nostalgic stop to  most Bengalureans.

How the restaurant got its name is as interesting as everything else about it.  Those days, naming hotels with the suffix Bhavan was the trend. Not many would opt to eat out in Basavanagudi, dominated by conservative Brahmin population.  There were a couple of educational institutions including National College and Acharya Patashala. Targeting the students from outside Bengaluru who would come here to study, the restaurant got its name Vidyarthi Bhavan, that later became a  brand.

In 1970, Ramakrishna Adiga, who also hails from Kundapura, bought the eatery. S Arun Kumar Adiga, his son who presently runs Vidyarthi Bhavan, told the story behind his father purchasing it.
“My father too hails from Kundapura and was working at a hotel in Cantonment.  The owner’s daughter and my father fell in love, and  both got married in 1968.

A couple of years later, my father wanted to start his own hotel. When he learnt about Vidyarthi Bhavan, he studied its menu and found out its USP. Since Friday was a weekly off for this eatery, he took over its reins on a Saturday, He retained everyone - waiter to cook. There was no change in taste or quality. The customers were not aware of change in hands, as there was no change in taste,’’ Arun said.  By that time the Dosa price became 60 paise. 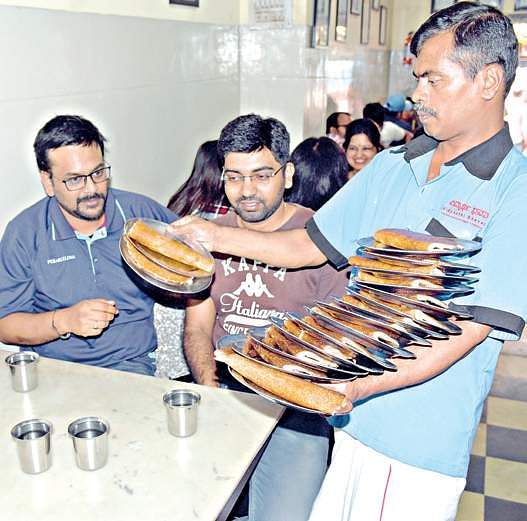 What’s so special about Vidyarthi Bhavan’s Dosa?  Arun gave a byte--- the red rice they get from Tumakuru and Chitradurga gives colour to the batter. “We used to get butter from Maddur for many years. Now it is from KMF. The Dosa will be thicker unlike the usual Masala Dosa we get in other places. Even today we maintain the same.”

When Ramakrishna Adiga (75)  Arun’s father, felt that he could no longer manage the business with advancing age, he wanted to close down the restaurant. “I have two sons, Arun is the youngest one.  Both studied engineering. My elder son settled down in the US. When both had their own careers, I wasn’t sure if they would want to run this eatery. I thought of demolishing this place and construct a shopping complex. The rent we get would be more than sufficient, but destiny had a different plan,” Ramakrishna said.

“When my father told me about his plans of closure, I was in a dilemma on  whether to take up this hotel business or continue with Reliance where I was a telecom engineer with a good salary. But I chose Vidyarthi Bhavan though I was sceptical,” said Arun.

It was N R  Narayana Murthy of Infosys who inspired him to take over this eatery. “He advised me to take charge of Vidyarthi Bhavan as it is a brand.  After I decided, I was still sceptical. I used to come here to have Dosa when my father was running it. The employees who used to pick me from school were still working. How can I be their boss? I can only manage well with their support,’’ he added.

Today there are 28 employees working with VB, many of them working for the last 25 years.  Some 13 years back, the restaurant was renovated. “We have a 96 seater and our property is L shaped with 2,500 sqft. The front portion of VB looks the same as it was 75 years ago,’’ Arun said.

“We have a variety of menu -- Idly, Vada , Khara Bath, Poori, Kesri Bath, Rava Vade etc. But Masala Dosa is our ATM (Anytime Masala Dosa). During weekdays, we make around 1,250 Masala Dosa, during weekend it will go up to 2,000. We use at least 4 kg of butter every day,” Arun said.

Loyalty shines A native of

Nelamangala, 88-year-old Gangathimmiah came to Bengaluru for the first time when he was 25 years old to see his would be bride. “My would be father-in-law who was a flower vendor at Gandhi Bazaar took me to Vidyarthi Bhavan and got me Dosa. The butter on Dosa was as big as an orange, the Dosa price was 35 paise. Even after four days , the aroma of butter and the Dosa lingered. After wedding, I came down to Bengaluru started looking after the flower business of my in-laws. It’s been 63 years, I have been a regular visitor of this place,” he said.

Rajinikanth is said to be a frequent visitor. “His friends say that he  comes here incognito. I wish to see him once,’’ Arun said. Kannada thespian Rajkumar too loved the Dosa here.  “Once when Rajkumar and Rajinikanth were discussing Dosas of a joint in Malleswaram, the latter advised him to try Vidyarthi Bhavan. Rajkumar used to get parcels from here. In 2005, after he was released by brigand Veerappan, Rajkumar visited our restaurant,” Arun recalled. Kannada writers D V Gundappa, G P Rajarathnam to Masti Venkatesha Iyengar used to come here too.