Vehicles lined up on roads brought traffic to a halt at Palace Grounds, Jayamahal Road, Queen’s Road, Ballari Road and in nearby areas.

Vehicles lined up on roads brought traffic to a halt at Palace Grounds, Jayamahal Road, Queen’s Road, Ballari Road and in nearby areas; policemen struggled to manage traffic movement manually as signal lights were switched off for more than four hours; patients and airport goers worst hit

BENGALURU: It was a chaotic Sunday for commuters in the heart of the city as Rahul Gandhi’s rally triggered a traffic gridlock at Palace Grounds, Jayamahal Road, Queen’s Road, Cantonment Junction and Ballari Road. At least 1.5 lakh people who came to attend the event also got the taste of the traffic for which Bengaluru has turned infamous of late. About 4,000 BMTC buses were pressed into service to ferry the people coming for the rally.

At around 4.30pm, the above junctions were totally chock-a-block with lined-up vehicles and pedestrians struggling to find a way ahead.It was a tough day for traffic cops as well who had to manage the signals manually at several places. Traffic lights were switched off for more than four hours.“The traffic snarls that began at 4.30pm continued till almost 8.30pm as several buses were parked on the road itself around Jayamahal and Palace Guttahalli,” said an official at Traffic Management Centre. A couple of ambulances were also seen stuck in the traffic tangles.

It was harrowing time also for the women who came from the outskirts. They were heard shouting for food and water from inside the buses near Jayamahal which were stuck in traffic for more than two hours before reaching Mekhri Circle. 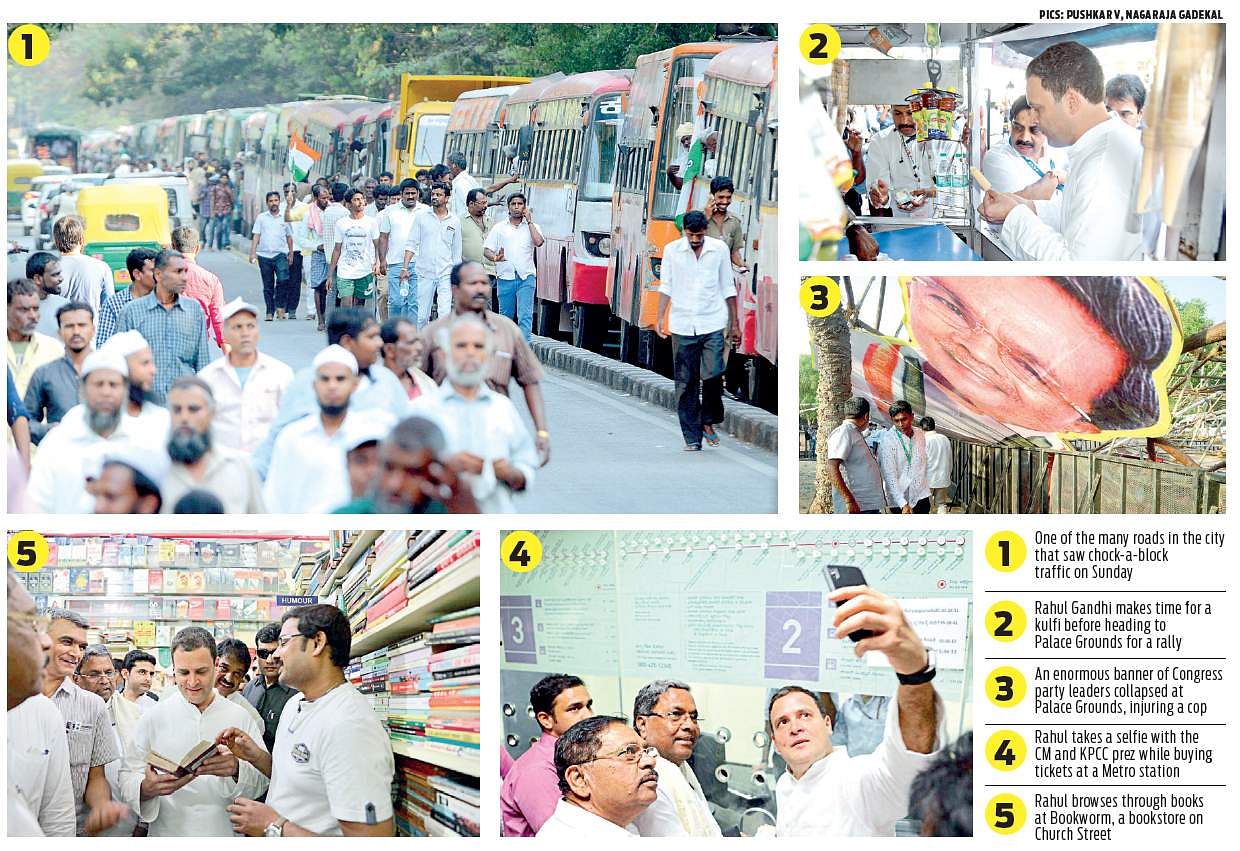 All roads to Balekundri Circle were blocked for hours, ambulances too got stuck

Balekundri Circle, a major traffic junction near Karnataka Pradesh Congress Committee (KPCC) Office in Bengaluru, became a chaotic choke-point for commuters on Sunday evening as BMTC buses hired by the political party to ferry supporters blocked all major arterial roads surrounding the place. Public transport buses with the poster ‘on casual contract’ and banners with Congress heavyweights’ pictures were stranded on Cunningham Road, extending up to Palace Road, Guttahalli Main Road, Millers Road, Infantry Road and Chinnaswamy Stadium. Traffic piled up up to Hebbal. As the jam continued for three to four hours starting from 4 pm patients going to and being discharged from major hospitals in this area like Fortis Hospital, Bhagawan Mahaveer Jain Hospital, Vikram Hospital, and Sparsh Hospital were stuck.

Nataraj HB, Fortis ambulance driver who has been in the hospital for seven years said, “I was bringing a heart attack patient from Nagarbhavi. Sundays are supposed to be clear days on roads. But it took me 45 minutes to the hospital.” An ambulance from Chinmayi Hospital was also stuck behind Fortis ambulance.

Santosh Kumar was headed to the airport from Kodichikanahalli. “At 6 pm he was still stuck in Cunningham Road. I have to check in by 6.45 pm, I think I will miss my flight,” he said.
Ramu G, a bus passenger rued that he had been stuck in the traffic jam from 3 pm to 4 pm.  Manoj was stuck with a goods vehicle as he travelled from Hebbal to Koramanagala on Cunningham Road. Even the roads near Mount Carmel College and Shangri La Hotel were jammed.

Things took turn for the worse when one of the busses ferrying supporters broke down on Cunningham Road. The supporters were seen pushing the BMTC bus.The Congress rally at Palace Grounds also affected the traffic. A citizen had to spend almost two hours on just Palace Road and Jayamahal Road between 7 pm and 9 pm.  “I left home from near High Grounds Police Station to attend a function, but had to return home without attending it as after more than an hour, I had only travelled until Jayamahal Road,” he said.

This had a cascading effect on traffic in surrounding areas

Now we are on Telegram too. Follow us for updates
TAGS
Rahul Gandhi traffic gridlock