Bengaluru: No respite from polluting autos

The much-vaunted two-stroke auto scrapping scheme announced by the transport department seems to have failed.

BENGALURU:The much vaunted two-stroke auto scrapping scheme announced by the transport department seems to have failed. The scheme was meant to be a relief for two-stroke auto owners ahead of a planned ban on these vehicles from 1 April.However, with elections fast approaching, the ban itself has not been put in place and these autos continue to ply in the city, causing more air pollution.

The transport department had earmarked Rs 30 crore to provide Rs 30,000 subsidy to each auto driver who turns in the old vehicle for scrapping. However, the scheme saw barely any response to merit the exercise of identifying scrapping yards and inviting applications from those who wanted to claim the subsidy and make the switch to four-stroke autorickshaws.

“Not many drivers came forward. We had budgeted for 10,000 autorickshaws till March 31 but fell far short of the target,” a department official said. The number of applicants by March end was not even 100.However, drivers have a different tale to narrate. According to them, the scheme was mismanaged by the department right from the beginning.

“Earlier, they made it seem like we could just drive to the scrapping yard, submit documents and get the subsidy directly into our accounts. For those of us who tried that, it was a harrowing experience. Sometimes, even RTO officials would tell us that the vehicle seemed to be in a good condition and discouraged us from scrapping it,” said Rajesha, a two- stroke auto owner.

According to K Manjunath, president of Adarsha Auto and Taxi Drivers’ Union, the process was too complicated to benefit auto rickshaw drivers.“The auto has to be taken to the scrapping centre in a non-working condition, the driver has to clear all pending cases if any. Even after doing all this, the officials would say that the subsidy will be released only after the new auto has been purchased,” he said.

With at least 20,000 such autos on city roads, the government has been trying to take two stroke engine-based autos off the roads because the amount of pollution they cause. But with a low subsidy amount and little clarity on how to go about scrapping, the move is yet to see any success.

A transport department official said, “This year’s budget does not mention scrapping of autorickshaws or whether the project will continue. It is still unclear if the drivers can continue to give their autorickshaws for scrapping as there is no budgetary allocation for providing subsidy.” Transport Commissioner B Dayananda could not be reached for comment.

The scheme offers Rs 30,000 as subsidy for 10,000 two-stroke autorickshaw owners if they agree to give their vehicles away to the scrapping centres. This subsidy, which the transport department said will be transferred to the bank accounts of auto drivers, is to be used to purchase a non-polluting three-wheeler. Two-stroke autorickshaws are major polluters as they emit particulate matter with diametre less than 10 microns (PM10). 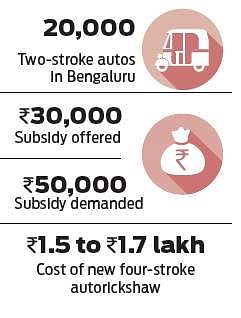 Stay up to date on all the latest Bengaluru news with The New Indian Express App. Download now
(Get the news that matters from New Indian Express on WhatsApp. Click this link and hit 'Click to Subscribe'. Follow the instructions after that.)
TAGS
auto owners polluting autos air pollution