Bengaluru has crossed the 5,000-mark of number of people going missing every year.

According to police officers, in most of the missing cases, some of them turned up on their own, while some others can never be traced.

A senior police officer from City Crimes Record Bureau (CCRB) said that as per their statistics, about 14 people went missing every day in the city, a majority of the victims being young girls, elderly people, children and those having Alzheimer’s. 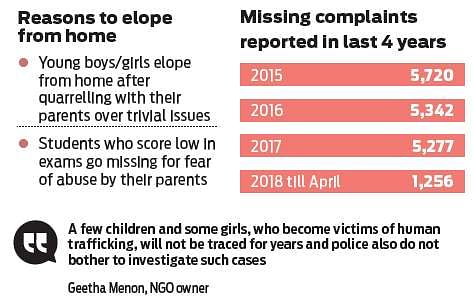 The complaints are generally filed after two or three days as the family waits for a while thinking that they would return, and then they try on their own to search with the help of their relatives and friends.

"The boys have a habit of running away from their home but many return after a few days. Some girls who elope with their boyfriends also call their parents to inform that they would like to stay separately."

In such cases, parents never inform the police and the cases continue to remain as ‘missing’. Some people mentally prepare themselves to go away from their homes over personal issues, extreme stress or being plain fed-up with the routine of life. It is very challenging to trace such people, the officer added.

Geetha Menon, who runs a NGO, said, “Only a few missing complaint will be lodged with the police as parents do not want to spread the incident among their relatives or neighbours. Even if they approach the police, they will not get a proper response as the police predict that the girl might have eloped with her boyfriend. A few children and some girls, who become victims of human trafficking, will not be traced for years and police also do not bother to investigate such cases.

Jyothi A, president of National federation of Indian women (NFIW), Karnataka, said, “Generally, complaints of women and children missing are not attended to with the effectiveness they deserve. Only when a case of habeas corpus is filed in the court that the missing woman or child is traced.

There is certainly callousness, apathy and lack of sensitivity in the police department in this regard right from the time when the missing complaint gets registered. Therefore, the erstwhile expert committee constituted by the state government under the chairmanship of  VS Ugrappa recommended constituting a special squad for redressal of missing cases.”

Stay up to date on all the latest Bengaluru news with The New Indian Express App. Download now
(Get the news that matters from New Indian Express on WhatsApp. Click this link and hit 'Click to Subscribe'. Follow the instructions after that.)
TAGS
bengaluru Missing human trafficking eloping missing persons