Cost of the contract is estimated at Rs 133.54 crore, according to tender.

BENGALURU: THE first step towards putting in place infrastructure to decongest the choked Central Silk Board junction has been taken by the Bangalore Metro Rail Corporation Limited (BMRCL). Bidders have been invited recently to carry out numerous works in connection with its proposed road flyover at the junction. 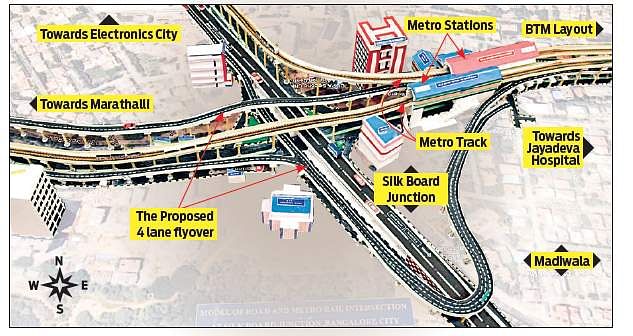 Confirming the calling of bidders for the project, BMRCL Managing Director Mahendra Jain told The New Indian Express that since the tender was issued just before the announcement of elections, it did not violate the model code of conduct.  According to the tender, the cost of the contract is estimated at `133.54 crore. It has called for putting in place loops, ramps for the road flyover at Central Silk Board junction for a length of 2.84 Km.

Road widening and allied works of Reach-5 line of Metro’s Phase-2 also figure in it.
“The proposed flyover is a rail-cum-road one. By the time BMRCL’s KR Puram-Silk Board line is in place by 2020, the signal-free flyover would also in place and would contribute enormously towards easing the massive traffic bottlenecks in Silk Board,” Jain said.

Commuters heading from BTM Layout and Jayanagar towards Sarjapura Road and vice versa can have a smooth ride when the flyover is in place. “The waiting at signals in these areas will be completely done away with. In addition to that, a separate loop would connect BTM Layout with Electronic City. It would be positioned below the flyover and a right turn needs to be taken for it,” he said.
The four-lane flyover will run for a 4-Km distance from Silk Board Junction to Ragiguda Temple in Jayanagar 9th Block.

Traffic studies at the Silk Board Junction in 2016 revealed that 12,000 vehicles pass through this spot in an hour with the average speed here being 4.5 Km/hour.

“The tender is likely to be finalised in three to four months. It will take two years for the completion of the flyover, and by then the Outer Ring Road Line, too, would be in place,” Jain said.

Stay up to date on all the latest Bengaluru news with The New Indian Express App. Download now
(Get the news that matters from New Indian Express on WhatsApp. Click this link and hit 'Click to Subscribe'. Follow the instructions after that.)
TAGS
Bangalore Metro Rail Corporation Limited Silk Board Junction flyover