Bengaluru tops the list in demand for office space

Bengaluru’s demand accounted for more than the combined share of the markets of Delhi-NCR, Mumbai and Hyderabad.

BENGALURU: The city reported the highest demand for office space in the country in the first quarter of the year. Bengaluru’s demand accounted for more than the combined share of the markets of Delhi-NCR, Mumbai and Hyderabad. Leasing of office space in Bengaluru grew by 50 per cent in the first quarter of 2018 compared to the same period last year.

The city also continued to top the national list in terms of leasing activity. All this was released by CBRE, a real estate firm, in its quarterly report on Wednesday. According to the report, banking, financial services and insurance (BFSI) industry, followed by e-commerce, research, consulting and analytics led the demand for office space. Co-working spaces and business centres continue to gain popularity. 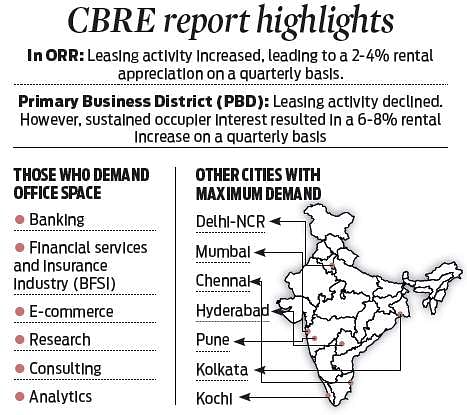 “Pre-commitments made in under-construction buildings continue to drive Bengaluru’s office market. Several of these commitments were finalised during the first quarter, resulting in an increase in activity,” said Shailendra Naidu, Executive Director, Advisory and Transaction Services, CBRE South Asia.

Also, office space in the country tripled to reach 9.7 million sqft with more than 80 per cent of this supply originating in Bengaluru, Mumbai, Chennai and Delhi-NCR, the report said. Pre-commitments (where lease agreements are agreed upon before the construction commences) will continue to be the primary mode of transaction in Bengaluru, the report adds.

“Constrained supply of ready-to-move-in space, coupled with rising rentals, has led to this trend gaining traction in recent months. The uptick in leasing activity in the first quarter is largely due to several projects getting completed. Going forward, as corporates continue to evaluate cost-effective options, pre-commitments in under-construction projects will have a significant impact on office leasing activity across key cities,” said Ram Chandnani, Managing Director, Advisory & Transaction Services, India, CBRE South Asia.

In the city, the Outer Ring Road and Central Business District dominated leasing activity, which was primarily concentrated in non-SEZ (special economic zone) developments. In its outlook for the rest of the year, the report says that the share of tech firms in overall demand for office space could drop as technology impacts the employee numbers because of layoffs. However, the remaining sectors will balance the overall market in the long term. Co-working spaces are also expected to grow strongly as more companies look to consolidate or expand their operations to newer areas.

Stay up to date on all the latest Bengaluru news with The New Indian Express App. Download now
(Get the news that matters from New Indian Express on WhatsApp. Click this link and hit 'Click to Subscribe'. Follow the instructions after that.)
TAGS
office space Bengaluru