Once in every two days, from 9:30-10 am and 2-3 pm, Ejipura gets to drink Cauvery water. But for one week, the water line has been reeking of sewage water.

BENGALURU:Residents of Ejipura woke up to an awful smell on Saturday. To their horror, they found that the sewage water had made its way into the corporation's Cauvery water line, rendering their only natural source of drinking water unfit for consumption.

" As soon as we smelt the stink, we all stopped the flow from entering our sumps. We placed buckets and bottles to collect the polluted water released by the pipeline. The smell was so strong, and though we could not see it, we knew the sewerage had gotten mixed with drinking water," said Janet Yegneswaran, while speaking to City Express.

The problem recurred on Monday, when the water was scheduled to be released. Janet, and a few others who use borewell water, were lucky enough to have an immediate alternative. 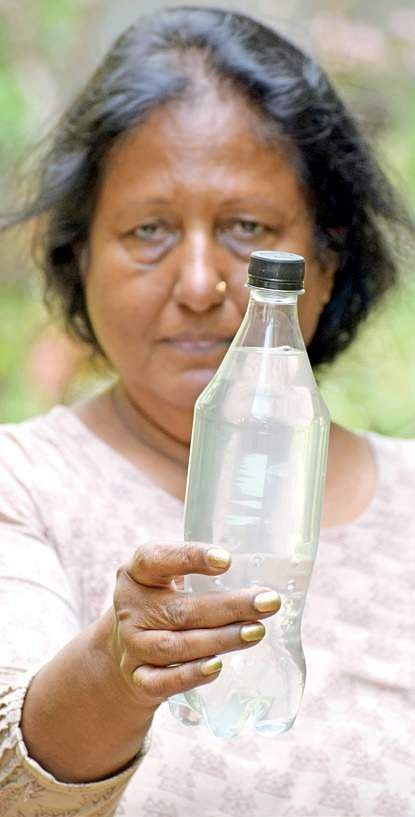 Narayan Reddy, another resident of the area, said, "For the last four days, the place has been stinking. One of the reasons could be the digging of roads to lay new water and drain lines in a neighbouring street. There could have been an accidental breakage of pipes, leading to the mixing. However, BWSSB officials are yet to ascertain the cause of the problem."

Come Friday, and the drain water continued to leak, turning the drinking water more brown than ever. Seven days have passed since the residents have gotten Cauvery water.

"I suspect that the increase in the number of commercial establishments, especially paying guest accommodations, has put excess pressure on our pipelines. Four years ago, they began to set shop. A while after, the drainage always used to get blocked and leak on the road. Rain water would collect on low-lying areas, instead of going into the storm water drain because of poor cementing," said Janet, who has been repeatedly complaining to BBMP and BWSSB about the insufficient pipelines.

Raju, an inspector from BWSSB, believes the contamination of Cauvery water could have been because of indiscriminate digging by residents to find the source of blockages or connect individual lines to main lines.

"They are supposed to call us and we have a process to clear blockages or connect smaller lines to the main line. However, they do it without intimation. They might have accidentally hit one of the pipes, causing a hole and leaks," Raju said.

When asked about digging work taken up by the officials on an adjoining road, Raju admitted that could also be a cause.

Assistant Engineer Rangaiah said," We received a complaint on Monday morning. On inspection, we found that the water line may have cracked at some point. We don't know why that happened though."

He informed that the drain and Cauvery pipelines were laid 10 years ago. Though he informed the residents, the leak would be fixed only by Sunday, he told CE that it would be done by end of Friday itself.

" It took us many days to dig the concrete, do earth work and locate the pipeline's end cap. We have traced it now, opened it to flush out the contaminated water and will repair the leak," Rangaiah said.

In response to the problem of regular drain leaks onto roads, Rangaiah said," The drain lines are connected to a wet well pump. At times, the pump may have a problem causing the drainage to back up and spill onto roads. We have planned to start replacing some of the drain and water lines but only on some ward lanes. Another issue is the heavy pressure on the underground lines, because people build four or five floors, shops and PGs. The lines are not able to handle this."

Even if the BWSSB decided to replace all the drain and Cauvery lines of the ward, the burden on the pipelines will return in the form of blockages and spillovers, the assistant engineer reveals. The infrastructure crumbles and leaks, literally and figuratively, as Ejipura rides the commercialisation wave.