Mareechi is the only Kannada film to be screened at South Asian Short Film Festival; the film is available on YouTube

BENGALURU:Mareechi team is all smiles for their short film that was the only Kannada film to be screened at the South Asian Short Film Festival (in the competition section) held at Kolkata recently. The team members, who are just back in town and are yet to unpack their bags, share the joy with City Express.

The short film which released about a year ago has garnered rave reviews from everyone. The movie showcases the sublime Bengaluru and portrays the relationship between the city and its people. The movie has Rakesh Maiya, Sparsha RK and Dhanush Arrya in the lead roles. The short film is the narration of English poems written by the director Akarsha Kamala and translated to Kannada by his mother Metikurke Ramaswamy Kamala. 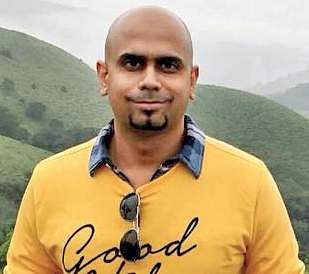 The director who is an electrical engineer by profession shares the thought process that went on in bringing out Mareechi. “As the story is about Bengaluru, I wanted to consider the city itself as a character and give it a voice. I felt like the movie should be more like a self-introspection with Bengaluru talking to itself about how it has changed over the years. So I decided to do it through poems instead of dialogues,” he says.

“Back then, the city was known for trees and its beautiful weather. But today, mention Bengaluru and people can’t stop complaining about the weather and traffic. But, for us, people who are born and brought up here, know that Bengaluru is suffering from an identity crisis, fighting with all its might to hold on to its culture and roots. The city is stuck between arguments about choosing modernity or tradition and that’s what I’ve tried to show it through my film,” Akarsha adds. Mareechi, he says, means ‘mirage’. It also signifies bright light or city lights.

“I’m born and brought up in Bengaluru and I’ve seen the city change beyond recognition. The city offers a lot of opportunities to people who come in search of it. Some succeed and some fail. People come to Bengaluru after being attracted by the City lights - which signifies the attractions that a city holds or the materialistic pleasures. However, their outlook changes based on how quickly their dreams are achieved or shattered. They ask ‘What else can this city offer me’ and start looking for the soul of the city. The film offers three different perspectives — as seen through the city, as seen by an immigrant and another by a homeless man,” he adds. The movie is available for free on YouTube.

At the film festival, Akarsha says, the film enthusiasts raised questions about this unseen Bengaluru and the director feels that the abstract-themed movie’s message has been conveyed efficiently. He wants to stick to short films, which he feels can reach global audience quickly and effectively. “The short film medium is extraordinary. It compels you to tell stories that people relate to in a limited time. Some day, I want to take Kannada films to the Oscars and Cannes. That’s my ultimate dream,” he says.

While Akarsha’s mother Metikurke Ramaswamy Kamala, a well-known Kannada poetess’ translation is used for narration, his sister Sparsha RK has acted as the lead and has also edited the film. His wife Madhura Raman has done the colour-grading. Brother-in-law Vikas Vasistha has done the sound design and has scored background music. Akarsha’s close friend Kitty Koushik has handled cinematography.