Bengaluru: Man steps in to stop molestation, punched by gang

Says even police didn’t help, asked him to hold the four drunkards till they reach the scene; senior officer denies getting any alert

BENGALURU: A private company employee, who stepped in to save a young woman from allegedly being sexually harassed by four drunk men on Old Airport Road on Saturday afternoon, got beaten up in the process. Arjun Nandakumar, who posted his bitter experience on Facebook, has criticised the city police for allegedly asking his colleagues to “hold all those four drunkards” till the officers arrived on the scene.  He also used #UselessBengaluruPolice in his post for their attitude towards the incident.
Interestingly, no case has been filed in this regard. 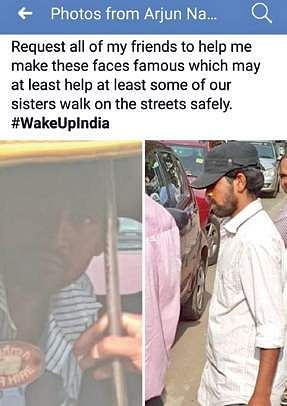 The incident allegedly took place when Nandakumar and a few of his colleagues, including a female, were returning to work after lunch. They noticed a young woman, an employee of a software company nearby, being targeted by a group of four drunkards outside a bar. The woman reportedly slapped one of the drunkards who had passed a lewd comment and allegedly groped her.

Nandakumar got into a verbal altercation when he questioned the drunkards and soon the situation worsened into a free exchange of punches. During the physical assault, he alleged that the four ripped his T-shirt, but escaped when they noticed one of Nandakumar’s colleagues trying to contact the police. He says he is particularly irked by the alleged response of the police who asked him and his friends to hold the drunkards till they arrived at the scene.

Additional Commissioner of Police (East) Seemanth Kumar Singh, however, told The New Indian Express, “So far, the jurisdictional police have no information about the incident as they did not receive any alert. We do not tolerate such incidents and I have asked the DCP to look into the case. Neither the girl nor Nandakumar approached the police. Thus, we are gathering information of the victims to take further action.”

“I was part of a shocking incident while I was walking along with my colleagues towards office after having lunch. When we were passing Daimond District, Old Airport Road, four drunk men were standing right in front of the bar. One of them suddenly groped a woman and she responded by slapping him. Seeing the horror, I intervened.

Another girl, who was with us, asked him to say sorry, (but) they were really persistent not to. Furious over this, they started pulling my T-shirt and tore it. I couldn’t help but throw some punches back at these perverts who again tried to manhandle me. When they saw one of my colleagues contacting the police, they fled the scene.

“To my surprise, we were surrounded by people who were well educated and yet blind enough to ignore the incident. We also tried to reach out (to) Bengaluru City Police who asked us to single-handedly hold all those four drunkards till they reach the scene. Well I hope I had the superpowers to do that #UselessBengaluruPolice. “Request all my friends to help me make these faces famous which may at least help of our sisters walk on the streets safely,” Nandakumar said in his post.