BENGALURU: About 75 karyakartas from the city got together with more than 400 karyakartas of the Yuva Brigade and Clean Mysore Foundation to take up the mammoth task of cleaning up the disputed river Cauvery.  Seven spots of the river were zeroed in and the cleaning drive went on from April 11 to 15. More than 60 tonne of garbage was cleared with the help of tractors and trucks. Bengaluru-based mentor of Yuva Brigade Chakravarthy Sulibele says, "The volunteers have distributed 10,000 pamphlets reaching 50,000 people. Their online campaigns have reached a million social media users. We will now continue our campaign post Karnataka elections."

The areas in focus for the drive are Kodagu, Kushalnagar, Ramanathapura and three spots in Srirangapatna that include Nimishamba, Paschima Vahini and Snanaghatta. The Yuva Brigade conceptualised this idea last year. Chakravarthy says, “When we went to the river in Kushalnagar last year, we saw it was polluted. We had planned to plant saplings there but an activist Chandra Mohan asked us to clean the river before planting the saplings. So we thought of taking up this initiative. There is lot of work that needs to be done and it is important to assign at least one minister to overlook the river.” 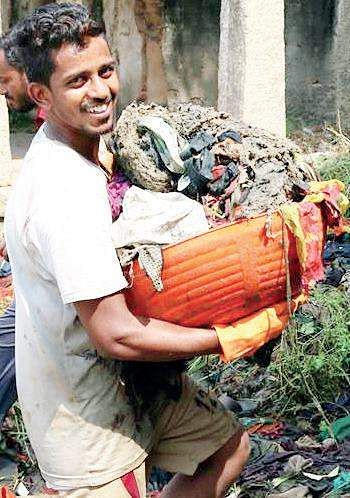 Glasses, syringes, cloth, plastic, plastic bottles, glass bottles and a whole lot of photo glasses of various Gods and Goddesses came was found while cleaning the river. Most of the volunteers were also injured while cleaning, “I got a glass piece stuck under my foot while cleaning. Almost 100 karyakartas were left wounded after the drive. There were Gods from all religions that were found in the river. We also put up notice boards in the bridge area where we found excessive garbage. But I don’t know how far that will help,” says Vardhaman Tyagi, co-convenor of Yuva Brigade.

Venkatesh Kahidi from Clean Mysore Foundation, too volunteered to take part in the drive. He says, “Majority of what we found was cloth. There is a tradition of taking a bath in the river and throwing garments into the water and all of this gets accumulated in few places. We targeted those spots specifically. The municipal department people collect `100 for maintenance but they continue to allow people to practice this activity.”

Angered by the way in which the river has been misused for so long, Vardhaman Tyagi says more than 200 trees have been felled in these areas because of various projects. “This river provides water to two states but look at what we have done to the river. People of both the states must come together to keep the river clean for us and for our future generation. Our forefathers have destroyed 40 per cent of it, if we continue to do the same what will be left of it for both the states? If we are able to do something about it now, we can save it. The water in Sidapur is not only unsuitable for drinking; it can’t be used for bathing also. Saving the river is not about caste or religion, but humanity,” he adds.

Stay up to date on all the latest Bengaluru news with The New Indian Express App. Download now
(Get the news that matters from New Indian Express on WhatsApp. Click this link and hit 'Click to Subscribe'. Follow the instructions after that.)
TAGS
Yuva Brigade Clean Mysore Foundation Cauvery