A gang of 8-10 men barged into a house, threatened the 60-year-old house owner with a pistol-like object, tied him up for over one hour and decamped with Rs 4.54 lakh cash and other valuables.

BENGALURU: A gang of 8-10 men barged into a house, threatened the 60-year-old house owner with a pistol-like object, tied him up for over one hour and decamped with `4.54 lakh cash and other valuables. The incident took place in Pillareddy Layout in Attibele police station limits on the outskirts of the city on Tuesday evening. 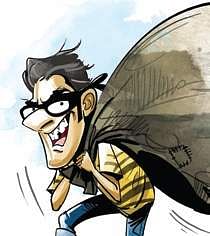 Police said that the house owner, Venkatesh Reddy, a farmer, was alone in the house when the incident took place. Reddy’s wife had gone to attend a wedding and he was also supposed to go there in some time, when a gang barged inside his house around 7.30 pm.

The assailants allegedly brandished pistol-like objects and some lethal weapons to threaten Reddy. After tying him up, the gang searched the house for almost an hour and found `4.54 lakh cash and some gold and silver articles. Before leaving, they robbed a gold ring an expensive wrist watch, which Reddy was wearing.

After they left, Reddy managed to free himself and approached the police. “According to him, the gang members were speaking in Urdu and Kannada, and were aged between 25-30 years. We are gathering details of similar offences at other places and formed teams to nab the accused,” the Attibele police, who have registered a case, said.

The City Market police have cracked the case of murder of a 20-year-old bar worker and have arrested his friend. Investigations revealed that both the accused and the deceased were in a relationship with a married woman and the deceased not paying heed to his friend's warning to stay away from her led to the murder. The accused has been identified as Jumma Khan, 32, a native of Manipur who worked in a poultry at KR Market.

He has been accused of stabbing his friend Nazamal Hussain alias Abbu to death at Bheli Srinivasachar Lane on Seegebheli Road near Khureshi Mosque on Mysuru Road, on Monday night. Jumma Khan was arrested based on a credible information.