Cancellations are set to continue this week too upsetting plans of many ahead of Onam.

BENGALURU: Dreading to travel to anywhere in Kerala, over 6,000 passengers from Bengaluru have cancelled their train tickets to that state in the last three days. Railways is now in the process of refunding over Rs 29 lakh to the passengers. With the flooding continuing unabated, ticket cancellations are set to continue this week and upset plans for the upcoming Onam festival. 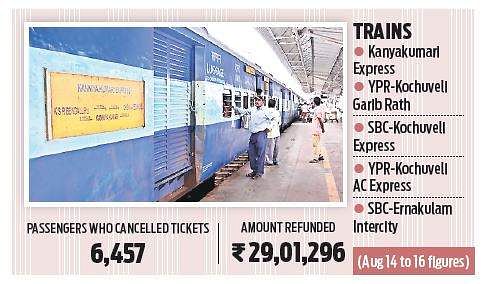 Kerala Samajam Bengaluru's General Secretary Reji Kumar said, "Most people I know of have cancelled their train and bus journeys to Kerala due to the heavy rain there. The shutdown of the Kochi airport till August 26 now has disrupted travel plans of those who had planned air travel too."

V Muralidharan and his family have ended up losing the ticket money too as it was a tatkal ticket. "We wanted to attend the wedding of a close relative in Thrissur and then head to our hometown nearby. We were supposed to travel on Thursday night but have decided against it after hearing about the terrible flooding.  We lost `2,700 now as they were tatkal tickets." Many others echoed this view.

The spate of cancellations all around is proving handy for someone like Pramod Komattil, who has taken threes day leave and is dashing to his hometown Palakkad to bring his mother to Bengaluru. "There is a small river behind my house and the water level is increasing. I am taking the Kurla Express tonight to Coimbatore and will somehow reach Palakkad and bring my mother immediately with me to Bengaluru," he said.

Now we are on Telegram too. Follow us for updates
TAGS
Kerala flood