Bengaluru to get 52 new suburban stations

BENGALURU: Here is good news for city commuters. The proposed suburban train will add more number of stations to the railway network of 161 kilometres in the city. The feasibility report conducted by Rail India Technical and Economic Service (RITES) has identified four corridors such as Kengeri-Whitefield, Bengaluru City-Rajanukunte, Nelamangala-Baiyappanahalli and Heelalige-Devanahalli, which have 29 stations currently.

While the 35km Kengeri-Whitefield corridor has 11 stations currently, it’s been proposed to add eight more stations (total 19), which translates to a station at every 1.8km. The second corridor (Bengaluru City-Rajanukunte) running 27km has six stations, and there is a proposal to add seven more (total 13) stations. This corridor will have a station every 2km. The 39km third corridor (Nelamangala-Baiyappanahalli) has five stations, and it is proposed to add 16 stations along the corridor (total 21), which will ensure a station every 1.8km. In the Heelalige-Devanahalli corridor, which is 60km in length and has seven stations currently, 21 stations are proposed to be added (total 28) to make it a station for every 2.2km.

Out of 81 stations, 10 typical stations of different categories have been identified for planning and intermodal integration. However, for the draft report, four stations have been considered. The Kengeri-Whitefield corridor will have Rail-Metro interchange at Kengeri station, the Kengeri-Whitefield and Bengaluru City-Rajanukunte corridor will have two types of interchanges such as Rail-Rail and Rail-Metro at Bengaluru City Station. Bengaluru City-Rajanukunte and Nelamangala-Baiyappanahalli corridors will meet at Lottegollahalli station interchange. 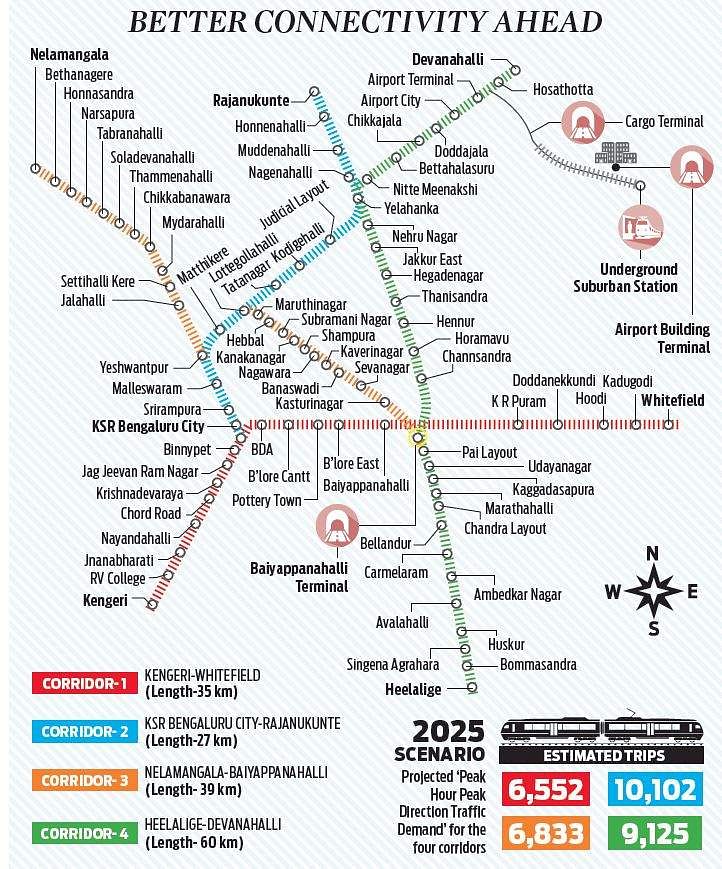 Now we are on Telegram too. Follow us for updates
TAGS
suburban stations Bengaluru City-Rajanukunte Kengeri-Whitefield