STP maintenance: Whose lookout is it, anyway?

Mayor says reach out to BWSSB, but Board says residential apartments should manage sewage treatment plants on their own by hiring professionals.

BENGALURU: The Bangalore Water Supply and Sewerage Board (BWSSB) cannot help the case of a blockage in Treatment Plants (STPs) inside apartments in any way, the board’s chairman Tushar Girinath said. 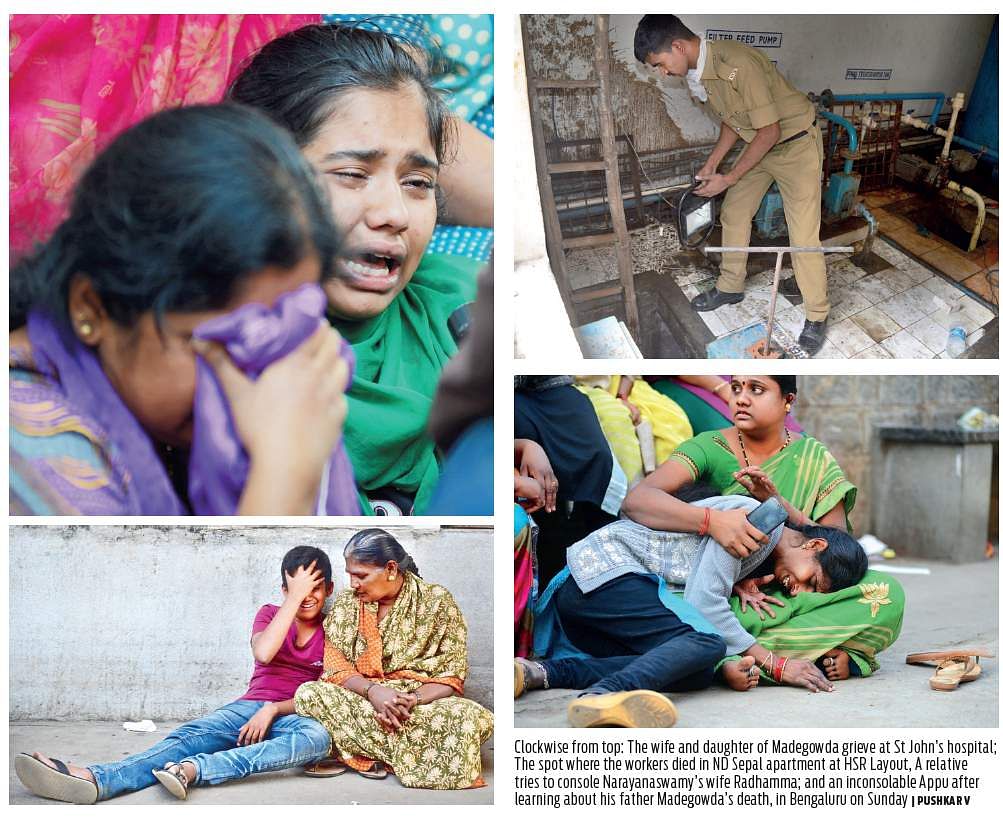 Professional agencies skilled in cleaning STPs need to be sought out by the public, he stressed.
Speaking to Express following the tragic death of three persons unskilled at cleaning the STP at ND Sepal apartment at Somasundarapalya, Girinath said, “Even the STPs of BWSSB are operated and maintained by professional agencies who are generally given a ten-year contract.”

Although Bruhat Bengaluru Mahanagara Palike (BBMP) Mayor said so, Girinath firmly ruled out providing the board’s jetting and sucking machines for assisting the apartments in cleaning STPs.
“These machines are meant only to clear blocked public drains and manholes. They cannot be used for STP operations. We ourselves take recourse to professional agencies only when we have problems with STPs,” he said.

Jayalakshmi, executive engineer (STPs), BWSSB, Koramangala and Challaghatta Valley, said there are 30 firms in the city which specialise in the maintenance of STPs and the board takes their assistance.
She stressed on the importance of apartments selecting good agencies to install STPs. “They will also take care of regular maintenance like it happens in case of BWSSB. If local agencies are hired to cut costs, then apartments will have a problem in emergencies.”

N Satish, Chief Engineer, Waste Water Management, BWSSB, compared an STP to a car. “If you buy a car, you need to take care of its maintenance. Similarly, it is up to the apartments to take proper care of their STPs,” he said.

The BWSSB chairman also said that a huge market exists in the city for STP services now.

Taking this very seriously: Mayor
BBMP Mayor Sampath Raj said “We have taken this tragic incident very seriously and the negligence of the management of the apartment is responsible for the death of the three workers. BBMP will also help the families to build houses since two of the families (of the deceased) have vacant sites in the city. Every ward across the city has jetting machines and the BWSSB and apartment staff should use it instead of allowing workers to clean them manually.”

Three workers got into a 15-feet deep manhole to decongest it and were suffocated to death on Kaggadasapura main road in CV Raman Nagar. Anjaneya Reddy, (34) Yerraiah (35) and Dhavathi Naidu (40) had come from Andra Pradesh. A week later, police had arrested three officials from Ramky Infrastructure Ltd for the negligence.

Two labourers died due to asphyxiation while cleaning a manhole of RNS Shanti Nivas apartment on Tumakuru Road in Yeshwantapur. The deceased were Venkatesh and Manjunath,  Both of them were living in Yeshwantpur and were employees at LNV Agency, a sewage treatment unit.

Two labourers were suffocated to death while cleaning a manhole at CPWD quarters during a maintenance work nearby Social Welfare Minister H Anjaneya’s quarters in Jayamahal. Prasanna, Sethu and four of the workers had come to clear the clogged manhole. BBMP contractor who did not provide any safety measures to the workers forced them to resort to cleaning the manhole manually, members of the BBMP Safai Karamchari Association had complained to High Grounds police.

Four of the workers were died in a manhole at Doddaballapur Town in Bengaluru Rural district. Muniswamy (34), a native of Tamil Nadu, Jagannath alias Jagan (28) of Andhra Pradesh, both labourers; Muniraju (24) and Madhu (22), the locals got into the 12-foot-deep manhole had no safety equipment. Tension prevailed at the spot as the locals staged a protest and demanded action against officials for the negligence.

Three labourers after descending into a sewage treatment plant died in a residential apartment complex in Electronics City. Ranjan (32) was from Odisha, Jagadish Kumar (28) from KR Nagar in Mysuru, and Mahesh (30) from Nepal.

Two workers, who stepped into a manhole, suffocated to death in Saraipalya, in Hennur. Sridhar Nagarajappa, 20, native of Davanagere and Bandri Marappa, 22, of Bellary. They were hired by Ecofil Pvt Ltd and had a contract with BWSSB for cleaning manholes.

Two workers from Bihar died in Peenya while cleaning a manhole at a residential apartment.

Stay up to date on all the latest Bengaluru news with The New Indian Express App. Download now
TAGS
Bangalore Water Supply and Sewerage Board Manual Scavenging