Of love, acceptance and finding your voice

Artiste brings his personal struggles with gender identity to stage, hopes to reach out to audiences

BENGALURU:Theatre lovers, SHIVA, a play that explores the complexity of gender identity and sexuality, while also speaking about basic emotions of acceptance and parent-child realtionships, is going to premier at Shoonya - Centre for Art and Somatic Practices on January 20 and 21.

A culmination of Bharatanatyam, Carnatic music and theatrics, through SHIVA, Daya Sakrepatna, its creator, tells a personal tale on coming to terms with oneself. He hopes to reach out to audiences who’ve been struggling with finding their voices. We caught up with the artiste, who talks to us about his own personal struggles, and how SHIVA is important for anyone who feels alone in theirs. 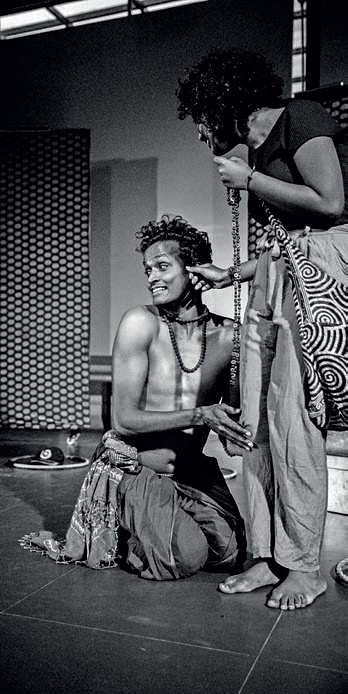 Tell us about yourself and your foray into theatre and Bharatnatyam.
After spending 13 years in Sweden working for a global conglomerate and parallely pursuing theatre and dance, I returned to India three years ago. Presently, I describe myself as a Bengaluru-based Bharatanatyam dancer, theatre artist and aspiring natural farmer. I hold a professional certification in performance arts from Arts College in Gothenburg, Sweden, and I’ve trained at various dance schools in India and Sweden.

I started learning Bharatanatyam at age five. After I had choreographed and performed a dance piece at our kindergarten annual day, my parents and teachers were receptive enough to spot my interest and put me into a neighbouring dance school. It was harder to keep up Bharatanatyam during my tenure in Sweden due to lack of good teachers, I pursued other dance forms like Contemporary, Jazz and Ballet. Theatre is something that I discovered 10 years ago in Sweden through evening courses.

What is SHIVA about?
Shiva is a full-length play with spoken dialogue, along with elements of dance, music and poetry. It narrates the story of a young poet Shiv and his journey of opening up to his mother about his sexuality through a series of letters and poems. These letters and poems deal with universal themes of conviction, fear and choice. Most importantly , they are an expression of a child’s deep longing for acceptance from a parent. These themes play out as simple and poignant stories of everyday people and their journeys around gender identity and sexuality, stories which bear Shiv to the culmination of his journey, depicting his mother’s journey of acceptance.

It is deeply personal and an attempt to find my own language as a performer. It is also an attempt to create a stage performance and a platform to trigger dialogue with its audience about the underlying themes of its stories – alternative identities, relationships, gender, sexuality, masculinity, peer-pressure, bullying, and mob violence. Although the stories are narrated from a gender and sexual identity perspective, the themes explored are universal. Human emotions are universal is what I would say is the key message of SHIVA.

You said SHIVA is very personal, could you explain?
I grew up in a middle-class Kannada family in Mysuru. My strongest memories as a kid are from the summers that I spent in my grandparent’s village, where I felt safe, protected and accepted.
As I grew older, the story changed. I underwent years of struggle with an inability to accept my identity as a male Bharatanatyam dancer, my slender body, my deviating interests in varied art forms or my sexuality. I was confused and suicidal. I walked around with a broken self-image formed out of bullying and constant failure to fit into the masculine norms set by my family, peers, community, schools and colleges. I finally decided to move away from India 13 years ago with a longing for acceptance. With this, I also moved away from all the art forms I so dearly practiced and loved like Bharatanatyam, Carnatic music, Kannada music and poetry. I tried to distance myself from everything that defined my Indian identity.  I then set out to find the new me in an alien country. After innumerable futile phone conversations with my parents seeking their acceptance, I realized that self-acceptance begins with oneself, I had to stand up for myself and accept myself first.

This marked the beginning of the formation of an identity which I believe was built on the principle of balance between my two cultural backgrounds, a rekindled love for Bharatanatyam and most importantly self-acceptance. I also discovered theatre and love on the way in a relationship that nurtured and accepted all of me for who I’m.

What are the parallels drawn between the God Shiva and the protagonist of the play?
India has always been a melting pot of cultures. Our present national identity is primarily built on the last few centuries of colonial Puritanism and sexual identities built on meager perceptions of traditions and modernism, without them even been given a proper name, or often disqualified as a western import. The basic idea with SHIVA is to narrate simple, poignant stories in a setting with everyday characters, language and a form that handholds an audience to the idea of alternative identities.

The stories of Shiva draw references to one of the most ancient deities of Hinduism, Shiva and his various forms. Shiva himself is described as fluid, formless and transcending, yet represented in multiple tangible forms. Nataraja, the destroyer Shiva dancing Tandava, a family man expressing his love to wife Parvati, a fusion of the masculine and the feminine in Ardhanarishwara and one of his most ancient forms, Adi Shiva. Each story in SHIVA is inspired by these different, tangible forms of Lord Shiva.

Talk to us about your group Anima & Animus.
Anima & Animus, a budding arts collective, was a result of a failed theatre project during 2016, which brought together a bunch of like-minded artists who wanted to create art that is meaningful and benefitting the broader community. We believe in questioning the gaps in our socio-cultural landscape through theatre, dance, music and also other art forms. We seek to tell powerful stories while bringing fluidity to established art forms. With wide experiences from the world of theatre, poetry, films and photography my fellow co-founders are Sneha Ram, Madhura Srinivas, Pratima Mishra and Shrikar Marur .