This bar allowed customers to stay way past deadline

Kailash Bar & Restaurant in Kalasipalya was a disaster waiting to happen.
Like most bars in the area and elsewhere in the city, the bar was found to be flouting not only the building

BENGALURU: Kailash Bar & Restaurant in Kalasipalya was a disaster waiting to happen.
Like most bars in the area and elsewhere in the city, the bar was found to be flouting not only the building and fire safety norms, but also the closure deadline rules.The closing time for bars in the city is 11pm on weekdays and 1am on weekends. But this is only on paper.Express has learnt that regular customers continue to drink and smoke long after the closing time at this bar, even after the serving staff has retired for the night.

One theory about how the bar caught fire is that one such customer may have left a burning cigarette behind, which could have set the place on fire.This is what what one of the bar employees said.
There are several such places in the locality where most employees sleep inside the bars at nights. Most of these workers are from outside Bengaluru.Shivakumar, husband of Leela Shivakumar, the BBMP councillor of the neighbouring ward of Chikpet, has grown up near Kalasipalya. He said these bars operate well beyond the closure time and added that this happens with the police’s knowledge. 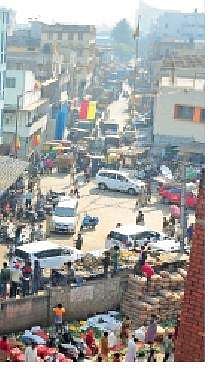 He said a majority of bar employees (about 80 per cent) are from outside Bengaluru. “They are usually bachelors who cannot afford to rent a place to stay and so end up sleeping at the bars,” he said.
“Several bars operate in violation of rules. Many are near temples, schools and residences. And despite complaints, they are not shut,” Shivakumar said.

Cramped streets slow down rescue operations
Basavanna C, chief fire officer for Bengaluru, said parked hand carts made the narrow roads even narrower, preventing the fire personnel from reaching the spot faster. A BBMP official said several buildings that violated the norms are owned by influential people who manage to stop the civic body from taking any action.

Regarding the issue of licenses for commercial structures, Basavanna said, “All commercial buildings are supposed to approach us for licenses, but they do not. These violations come to light only when such incidents occur and then we issue notices to the outlets. The Director General for Fire and Emergency Services M N Reddi has asked us to check bars above 15 metres for violations after the Mumbai incident.”

What the National Building Code says
A road that has high rise buildings (taller than 15m) should not be less than 12m wide. But the roads in the market region are as narrow as 2-3m.
The entrance to these buildings need to be a minimum of 6m wide, but most have just a 2m-wide entrance.
High rise buildings should be equipped with fire alarm systems and fire extinguishers, but most do not have them.
The fire escape route should be well displayed. Here, these were missing.