The frequent transfers of the commissioners of food and civil supplies department is an apparent indication of the rot in the system.

BENGALURU: The frequent transfers of the commissioners of food and civil supplies department is an apparent indication of the rot in the system. Opposition parties and activists have been alleging irregularities in the public distribution system, especially in the Chief Minister’s pet Anna Bhagya scheme.
The Siddaramaiah government, which came to power in May 2013, launched the Anna Bhagya scheme the same year.

The objective was to provide subsidised food grains to below poverty line (BPL) families. While initially it was about supplying 30kg rice per family at Re 1 a kg, the government later modified it to provide 7kg of rice per head for free. In Karnataka, 1.1 crore families (more than four crore people) are eligible to get free rice and grains every month under the scheme from more than 21,000 fair price shops spread across the state.

A senior officer in the department said the last three years were hectic for the commissioner. “We were linking Aadhaar with ration cards, and thus deleting bogus cards. When we started linking, there was pressure from various influential people. There was non-cooperation from the staff too. In this process, unable to handle pressure, some sought transfers and some got transferred,” the officer said.

“If officers are transferred after short tenures, they cannot work efficiently. One needs at least two months to even know the systems in place and how the department functions,” said an IAS officer.
Retired IAS officer M N Vijaykumar said with the well-intended Anna Bhagya scheme, corruption in the department has actually increased.

“In fact, I had filed a complaint in 2014 about this, but nothing has been done so far,” he said. Explaining the reasons for the frequent transfers, he said: “Here, no officer -- whether IAS or KAS -- is allowed to stay for more than one year. Some corrupt IAS officers seek transfers within a short duration. This is because in case of a scam in their tenure, they do not want to be held accountable.”

When contacted, Food and Civil Supplies Minister U T Khader said, “It is not a good trend to transfer officers holding one of the highest posts in the department. However, we have not done it. Some people take transfers after reporting. Some of them do not work effectively. Through our Anna Bhagya scheme, we supply 7 kg of rice to 4 crore people. One can imagine the workload. In some cases, the commissioner and the higher-ups do not gel well; so either the secretary seeks a transfer of the commissioner or the commissioner himself seeks a transfer.” 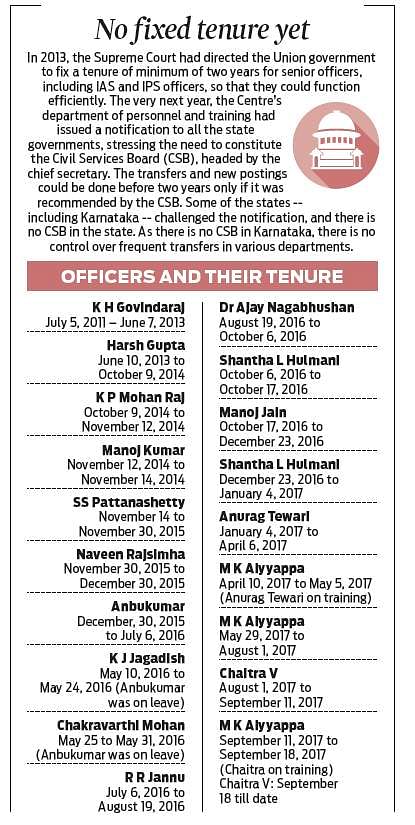