IN a persisting trend of corporal punishment meted out to schoolchildren in Bengaluru, a 10-year-old hearing impaired boy was allegedly beaten up with a stick by his Kannada teacher on Thursday mornin

BENGALURU: IN a persisting trend of corporal punishment meted out to schoolchildren in Bengaluru, a 10-year-old hearing impaired boy was allegedly beaten up with a stick by his Kannada teacher on Thursday morning for missing his remedial class conducted after school hours on Wednesday evening.
Shockingly, the teacher had simply ignored the child’s challenges of competing with ‘normal’ kids.
The boy, Harish, is a class 5 student at the AU Primary & High School located in Vyalikaval.

On Thursday morning, the Kannada teacher, Narasaiah, asked him why he skipped the remedial class and demanded that he produce the homework given in that class. As Harish had missed the class, he did not know about the homework. This angered Narasaiah, who allegedly beat the boy with a stick.
Harish’s mother Vijaya rushed to the school on being informed by some parents about the incident, and since their residence is close by, she was there in a few minutes.

“When I saw my son, he was bleeding in his right heel, and there were marks on his hand, upper arm and cheek. I am his mother, and even I don’t hit him! How can they hit him in school? she asked.
Several parents, who gathered at the school, dragged Narasaiah outside the school, demanding that he be handed over to the police.

But school secretary Tanveer Ahmed Jaffer intervened to pacify the crowd and also convinced Vijaya not to file a police complaint. However, Jaffer told  Express: “Even his father beat him (Harish) when he missed the class, but they made it a big issue when the teacher beat him!”
Just three days ago, another 10-year-old was beaten up in a South Bengaluru school for not doing his homework, and parents had protested there too.

Teachers need a few lessons too

The latest incident of a 10-year-old hearing impaired boy beaten up with a stick by his Kannada teacher on Thursday morning has once again highlighted the insensitivity of teachers towards children. The main reason for the rise in number of cases of corporal punishment is a lack of training for teachers, where they are taught how to handle students, feel experts. 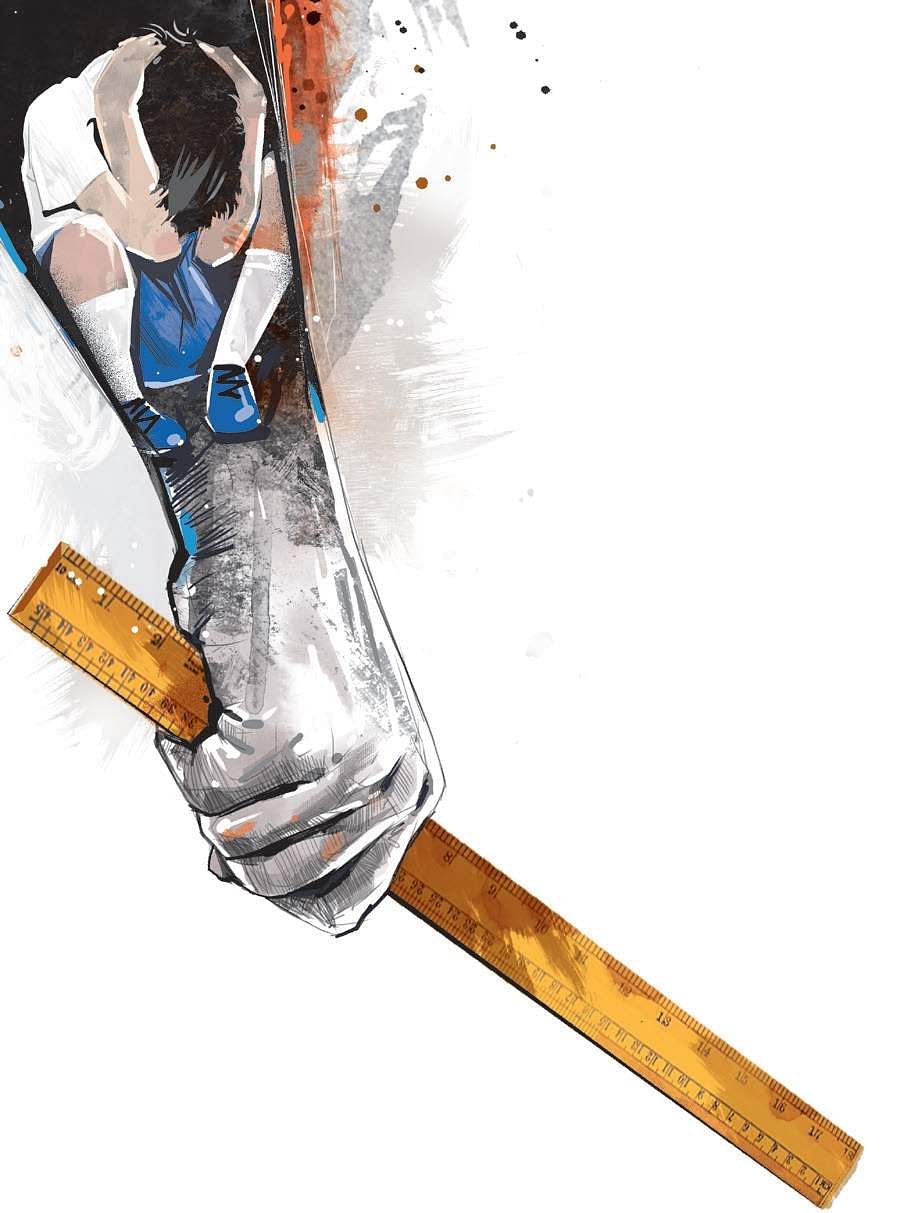 According to child right activists and education experts, most of the private (budget) schools in the state hire people with PUC certification or with a general degree as teachers and a majority of them are not given any training on how to handle children. “Sensitisation and induction programmes are a must for every teacher during the beginning of the academic year. Every teacher must know how to ensure discipline without affecting the dignity of the student,” said academician Dr Niranjanaradhya.
He even added that, education being a process of learning, teachers cannot expect perfection in children. “All of us were children and every teacher must understand the fact that it is normal for kids to make mistakes and be mischievous. Teachers must bring change in kids’ attitude without punishing them,” he explained.

“I feel lack of continuous training for teachers is one of the reason for such incidents. Along with monitoring, there should be stern action against teachers when such cases are reported. This will make other teachers more careful and cautious.”

According to child rights activist Nagasimha G Rao, a methodology on teaching and handling students in the classroom must be taught to teachers during their training period. “But, in most cases, teachers are not trained for this profession. We always recommend schools to conduct training programmes for teachers at least once a month and cover all these issues.”

Courses dedicated to training of teachers like Diploma in Education (D.Ed) and Bachelors in Education (B.Ed) are offered by many institutions. The Union HRD ministry recently issued a circular asking all states to instruct schools to have trained teachers. This applies even to government and private schools and the data of all teachers must be sent to the ministry. In case of untrained teachers, they will be removed.

Recent
incidents
Despite a ban on corporal punishment, the Karnataka State Commission for Protection of Child Rights (KSCPCR) received 30 complaints till November 2017. The Child Helpline (1098) gets at
least two calls per week.
January 2018
A child at a private school in city was beaten for carrying a mobile phone. Parents approached the child rights commission
and filed a complaint.
December 2017
A complaint was received by the Child Helpline in which the complainant said the teacher had plastered a child’s mouth for more than an hour for being talkative in a school in Chamarajnagar district.
November 2017
A city school secretary/
principal had slapped a Class 4
boy when ink spilled from his pen and soiled the uniform shirt of his classmate. Following the incident, the class teacher took the boy to the principal where he
slapped the kid.
February 2017
A 5-year-old girl was
undressed in front of peers and other children were asked to chant ‘Shame, Shame..’ in the class. The punishment was for being
a slow learner.
February 2016
A 14-year-old boy fainted
in a private school in Ulsoor
in the city when a teacher beat
him for not completing the homework.

What law says?
Corporal punishment is prohibited under Section 17 of the Right to Education Act and has been incorporated as part of the Juvenile Justice Act under which a three-year jail term is prescribed for the accused teacher.