Bengaluru: Winter is over, brace for sultry days

The sultry weather causing unease among the residents of Bengaluru and other parts of the state is unlikely to subside anytime soon.

BENGALURU: The sultry weather causing unease among the residents of Bengaluru and other parts of the state is unlikely to subside anytime soon. Warm weather, with average temperatures two to three degrees above normal, has been recorded in many parts of the state and it is expected to continue during the week. 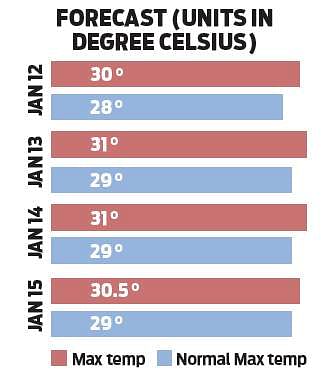 The warm weather has been attributed to the reduction of Northerly winds, which ensure cooler temperatures. Karnataka has an inflow of Easterly and North-Easterlies which result in the warmer conditions, according to Indian Meteorological Department (IMD), Bengaluru.

Sundar Mahadev Metri, Director, IMD, Bengaluru, told The New Indian Express that sultry conditions prevailed in the region due to the change in winds flowing to the state. “Generally, northerly winds flow in the state during the current season. However, we are recording easterlies and north-easterlies. What’s causing the uncomfortable feeling is the moisture content in the air, which is 40-46 per cent,” he said. According to IMD, the maximum temperature in Bengaluru was three degrees above normal since Saturday. While normal maximum temperature for the period is 27.5 degree Celsius, Bengaluru recorded 30.5 degree Celsius. Minimum temperature too was a degree above normal at 17.1 degree Celsius.
Metri said this was expected to continue at least for the next five days.

36.9 degrees Celsius at Karkala in Udupi
According to data by Karnataka State Natural Disaster Monitoring Cell, most of the districts in the state saw maximum temperatures in excess of 30 degree Celsius. In the 24-hour period ending on 8.30am Tuesday, the highest temperature in the state was recorded near Karkala in Udupi district, at 36.9 degree Celsius.

HEAT TRAP
S S M Gavaskar, scientist at Karnataka State Natural Disaster Monitoring Cell, said apart from change in wind direction, overcast conditions too were responsible for rise in temperature. “The cloud cover is acting like a heat trap,” he said. “Although summer temperatures will depend a lot on pre-monsoon showers and other atmospheric conditions, average maximum temperatures are expected to be 2 to 3 degrees above normal,” he added.