Do you want to join politics?” Was the million dollar question shot at actor Danish Sait several times by politicians and public, during an interaction session.

BENGALURU: Do you want to join politics?” Was the million dollar question shot at actor Danish Sait several times by politicians and public, during an interaction session. Political satire Humble Politician Nograj has garnered rave reviews and is being widely appreciated by the audience.

B.PAC (Bengaluru Political Action Committee) had organised a special screening of the film and an interaction session with the film crew and politicians on Thursday evening. Six corporators, Mayor Sampath Raj, MP Rajeev Gowda and B.CLIP leaders attended the screening and the session.

Responding to the questions, Danish said that politics is not his cup of tea and he would just stick to acting. The actor clarified that he would rather serve people by being in the media or as an actor than taking up politics.

Speaking to CE, Danish Sait, said, “It was a very interesting event. But many were disappointed with the ending as the bad guy wins, leaving them with no hope. But that’s the thing. The movie is a message to the voters – to vote responsibly. Bad guys won’t change...  Ultimately the onus is on the voters – to choose Nograj or Arun Patil.”

“During the screening the leaders were seen clapping and cracking up, especially during the scene where MLA is yelling at the corporators,” Danish added.

“After the screening, they (politicians) took many photos with me. In the near future, they might use it in their posters after I become a superstar,” Danish added on a lighter note.

Director Saad Khan said, “Younger audience are liking the comic tonic and the older audience are enjoying the satire. During yesterday’s session we met a few promising politicians. We hope that they get inspired by Arun Patil (Played by Roger Narayan).” 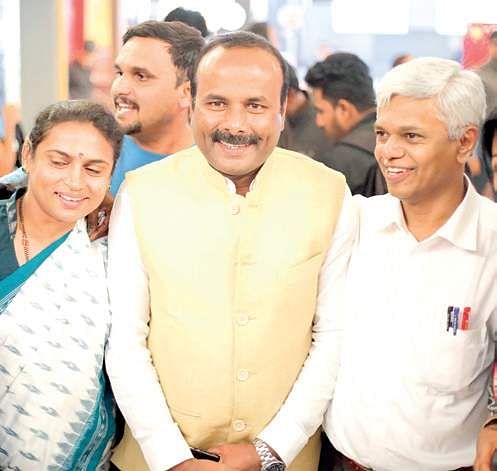 Members of BPAC told City Express that the politicians watched the movie and laughed their lungs out throughout the screening. “Political leaders from different parties were under one roof, enjoying the film, without any differences” they said.

Mayor Sampath Raj, after watching the movie, told that he watching the movie ‘in a lighter vein.’ “For a city like Bengaluru, a lot needs to be done in terms of development. The process has already been initiated and people will see the difference soon,” he said. Mayor also  admitted that he quiet liked the film.
MP Rajeev Gowda said that he found it very refreshing to get politicians from all parties on the same platform laughing their lungs out.

“I had a great time interacting with the aspiring leaders from B.CLIP,” he said. Danish also urged the BCLIP leaders to be more committed, honest, humble and not be like Nograj, - a narcissistic politician. Danish also spoke about the low voter turnout urged more people to vote and bring the change. Jeyalakshmi K, Vice President, Women’s wing, Janata Dal (S) and a BCLIP leader from batch one said, “I enjoyed the screening and had so much fun interacting with top leaders from all parties. I have take some message from the movie too. The movie was great fun.”