The annual Lalbagh Flower Exhibition, that started on January 19 and will be ending this Sunday, saw its highest footfall on Friday on the occasion of Republic Day.

BENGALURU: The annual Lalbagh Flower Exhibition, that started on January 19 and will be ending this Sunday, saw its highest footfall on Friday on the occasion of Republic Day. This year, the theme, which revolved around the upcoming Mahamastakabhiseka in Shravanbelegola, 3.39 lakh visitors visited the botanical garden in the past eight days raking in a revenue of `120.63 lakh for the Horticulture Department. Republic Day saw the highest footfall with a 1.31 lakh turnout. Friday’s revenue alone was `55.55 lakh, according to Chandrashekar, deputy director of the Lalbagh Botanical Garden.

While scores rushed to see the floral Gomateshwara statue, most did not seem to know its thematic significance. Others with a keen eye for detail identified the flowers used for the decoration. “The flowers decorating the statue are imported,” said Venkatachalam, from the security agency overseeing the event. While the glass house sheltered a massive bust of Mahaveera and a recreation of Shravanabelagola, with rare flowers surrounding all corners, around it were some nursery stalls, selling varieties of flowers. 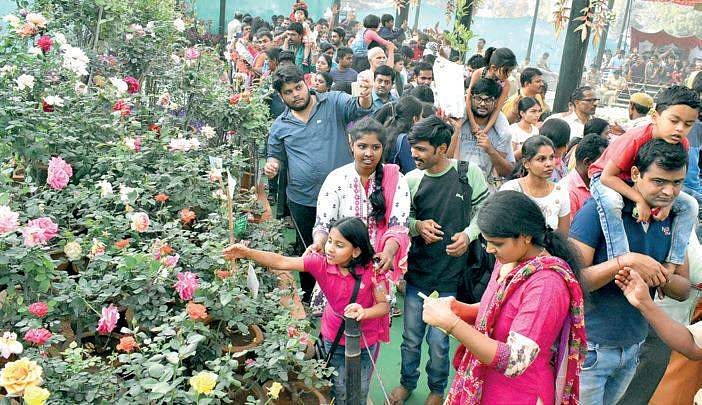 However, with a huge crowd, niggling issues like the lack of facilities persisted. A primary contention for those spending the whole day after travelling from afar was the unavailability of a food court with proper meals. “They have snack stalls instead. How do we make our children eat Churmuri for lunch?” asked Guna, who was accompanied by his family from Peenya. Bottled water was sold at `30 a litre and the free water dispenser ran dry, said a visitor.

Another issue was the unavailability of toilets at regular distances. A team of girls said they did not visit the toilet as it was not fit for use. Ashok, a chemist near the Lalbagh nursing home said parking was an issue around the garden as visitors parked on the road at East gate despite the allocated lot at double road. “I had to park my vehicle at Mantri Mall and take the metro,” he said. The problem is likely to continue till the weekend.

However, the show did not impress frequent visitors like Jayalakshmi, a 70-year-old from Kadrenahalli, who was disappointed with the lack of greenery and breeze in the garden as opposed to 1972, when she resided near the garden and frequented it often. “Now, there’s just garbage lying around,” she added.
“There are more stalls and people than flowers here,” said Shivraj, a businessman from Peenya.

Stay up to date on all the latest Bengaluru news with The New Indian Express App. Download now
TAGS
bengaluru republic day