BENGALURU: Taking serious note of the alleged non-cooperation of its field officials with the prosecution to defend important cases related to encroachment of reserve forest in Bengaluru Rural district, the forest department has issued a strict warning to them. This was after the Government Pleader Nataraj G Kotre, Bengaluru Rural District, shot a letter to the forest department highlighting the failure of forest officials in protecting the precious forest from the land grabbers. 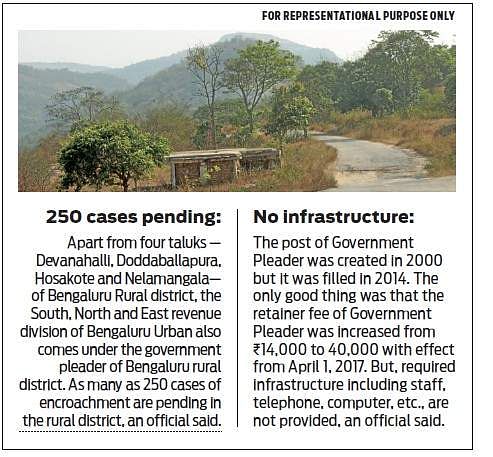 In his letter dated November 27, 2017, Kotre has said that many cases pertaining to the forest department were pending before different civil and appellate courts in Bengaluru rural district. Forest officials — Range Forest Officers, Assistant Conservator of Forests and others in particular — have failed to show their commitment in dealing with such cases. Their act amounts to a serious lapse in saving precious forest lands from the clutches of land grabbers, Kotre said.

Based on this, Vijayakumar Gogi, Secretary, Department of Forest, Environment and Ecology, issued a circular on January 10, 2018 to all field officials of forest department. In the circular, Gogi said, “The said allegations are serious in nature which were brought to the notice of the government for review”.
Gogi further stated that Kotre has also asked the government to apprise all field officers of the forest department to protect the forest land by cooperating with the Government Pleader as per the directions issued by the Supreme Court.

“In this backdrop, the forest department has considered the communication of Kotre seriously. Therefore, all field officials in Bengaluru rural district should consult the Government Pleaders in person to defend the cases effectively to protect the forest land. This will help the government to win the case against the land grabbers.”  Gogi also warned the field forest officials that they will have to face serious consequences if they failed to take note of the matter seriously.

Stay up to date on all the latest Bengaluru news with The New Indian Express App. Download now
TAGS
bengaluru forest