Bellandur lake,  once a birder’s paradise

Ornithologists, ecologists remember this as a place visited by thousand of birds; Today state to submit deadlines to National Green Tribunal to revive lake

BENGALURU: City’s largest lake, Bellandur lake, was once home to several migratory birds from Siberia and other parts of central Asia. And it was not so long ago. Ulhas Anand, co-founder of Ecoedu, says he remembers recording 52,000 ducks here 20 years ago.

Dr MB Krishna, an ornithologist adds, “Migratory ducks were abundantly found in the lake, often exceeding some twenty thousand birds a quarter of a century ago.  Now, the bird population in Bengaluru has generally come down by 80%. More than a lakh water birds could be counted during our surveys in the 90s.” 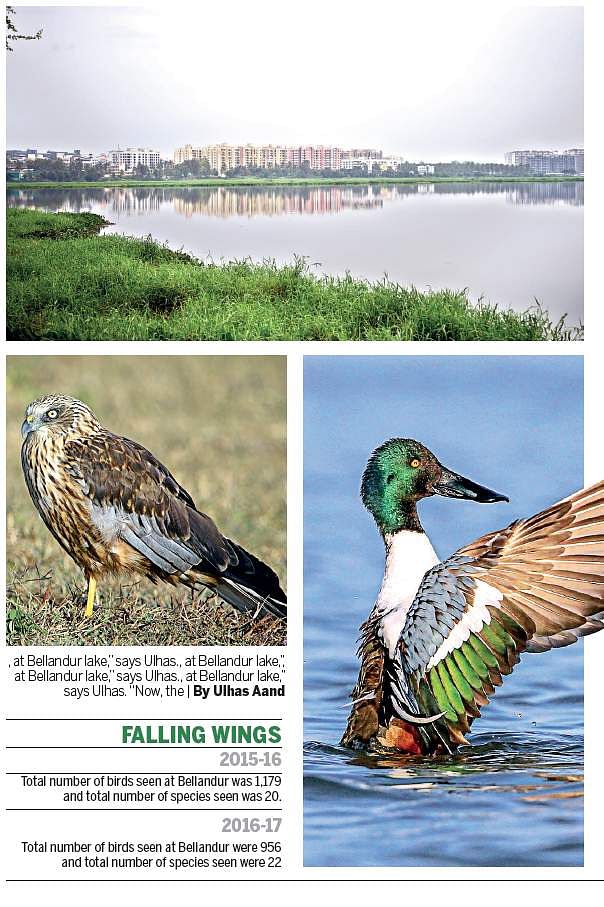 Bellandur is one of the largest lakes in Bengaluru. It used to welcome species such as the Northern  Shoveler,  Northern Pintail, Garganey, Common Teal, Red-necked Falcon, Black-winged Stilt, Wood Sandpiper, Green Sandpiper, Common Sandpiper, Marsh Harrier and Barn Swallow during the winter.
Ulhas says, “The sight of them taking off together was beautiful.” You may still spot Barn Swallows, but not other species, he adds.

These birds fly long distances from their breeding grounds to escape the cold, and travel further south to the tip of India or even Sri Lanka. “You could see them from December or January till April, until summer descends, at Bellandur,” says Ulhas. “Now, they can be seen in other parts of Bengaluru and India, but not in this lake. The Bellandur lake is biologically dead,” he adds.

K Jagannath, former Panchayat president of Bellandur Gram Panchayat, remembers that there were 20 to 30 varieties of fish in the lake and that more than 300 fishermen families of the surrounding villages were dependent on it. “There were  fish like katla and snake fish. The fishermen would do pooja at a temple at Bellandur tank, as their livelihood was dependent on the lake,” he says, adding that the lake was a farming hub. “Farmers used to grow ragi around it. They used to get up at 2am and travel in bullock carts to Koramangala to get manure. They also used to use the lake’s water for drinking and irrigation.” The vegetables that were grown here were sent to Shivaji Nagar Market, he adds. When he was a kid, in 1978, he had once been to the Bellandur tank, and “the water was about 35 feet deep.”

Boat racing was once planned at lake

Jagannath was a sarpanch of the Bellandur division during the 90s. He says there was a proposal to organise boat racing by the National Sports Association and a person had been sent to clear out the weeds. “In 1996, I remember going with him on a boat. The lake was so filled with weeds and slush that the boat wouldn’t move. We found plastic, tiles and medical waste in it, and it was impossible to check the water level in the tank,” he says. The boat race had to be called off.

Mansoor Ali from Bengaluru by Foot, says the lake was used by the British to train their army. “They did canoeing, rowing and such. There were villages and farmlands surrounding the lake, where they would grow vegetables for the British army. Over the years, the farmlands were sold to IT companies and BWSSB started diverting sewage into the lake thinking nothing will happen.”
Dr MB Krishna, an ornithologist, says that the lake is over three kilometres long, and perhaps even longer than the HAL airport runway. “During World War 2, there were attempts to land seaplanes there,” he says.