One of the major personalities behind the design of the Vidhana Soudha, will finally find a permanent space for himself in the Soudha.

BENGALURU: One of the major personalities behind the design of the Vidhana Soudha, will finally find a permanent space for himself in the Soudha. The state government is all set to install a statue of the Karnataka’s first Chief Minister K C Reddy along with a statue of poet and philosopher Kanakadasa at the seat of the state’s legislature. Each statue, meant to be a move to honour Reddy and to woo the Reddy and Kuruba communities, will cost `2 crore each. This cost was approved by the Finance Department recently.

Kyasamballi Chengalaraya Reddy was the first CM of the then Mysuru State (1947-1952) and played a major role in making the blue prints of Vidhana Soudha. Infact, he was the one who invited former Prime Minister Jawaharlal Nehru to Bengaluru to lay the  foundation stone for the building.

There has a long standing demand to install his statue inside the Soudha’s Assembly hall. “No statue has come up inside the Assembly hall till now. So, we decided to install it within the vicinity of the Soudha. We have finalised the location and it will be placed at the West entrance of Vidhana Soudha,’’ K B Koliwad, Speaker, Karnataka Legislative Assembly, said.

Talking about the time frame, Home Minister Ramalinga Reddy, who took the initiative to get the statue installed, said, “K C Reddy’s birthday is in May and since the election is during the same time, code of conduct will be enforced. So, we want to make it at the earliest by March.’’ When asked why the state’s Home Minister was taking interest in the project, he said that he had earlier announced it during Reddy Samavesha.

“Its not just because he was the first CM, but also because he was responsible for getting many public sector undertakings like HAL and BHEL, which came to Bengaluru because of K C Reddy.’’ Now they are waiting for exemption to be granted under section 4(G) of the Karnataka Transparency in Public Procurement Act, which permits exemptions for specific procurement as notified by the government. “Once it is done, we will entrust it to Public Works Department to take up the statue work,’’ he added.

The government will also install the statue of philosopher Kanakadasa around March. “The Finance Department has approved the expenditure for the poet’s statue and it is `2 crore. It will come up at Vidhana Soudha (Legislative House side) and will be done by the end of March,’’ Ramalinga Reddy said.

However, BJP leaders saw vote-bank politics in this move. “All these years they (Congress) did not bother to install K C Reddy’s statue, even though there was a demand. With the election nearing, the government is remembering the legends,’’ said a senior BJP leader. 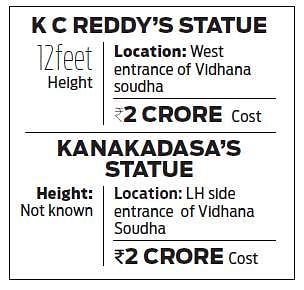