BENGALURU: In response to a public interest litigation asking the court to declare bandhs or strikes as unconstitutional since it violates the fundamental rights of citizens, the Karnataka High Court on Monday ordered emergent notices to the chief secretary and the Kannada Chalavali Vatal Party. The petitioner wanted court to order an enquiry into damages caused by bandh and to ask organisers to place a deposit to cover damages that could be caused to exchequer. 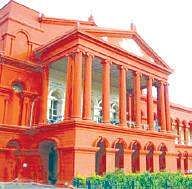 A division bench of Acting Chief Justice HG Ramesh and Justice PS Dinesh Kumar issued notices to them after hearing the petition filed by the Shraddha Parents’ Association.The petitioner requested the court to direct the chief secretary to ascertain the damages caused due to the bandh on January 25 and the proposed Bengaluru bandh on February 4 over Mahadayi water dispute, and to direct the president of Kannada Chalavali Vatal Party to deposit ` 500 crore as security to pay for damages caused to the state exchequer and for relief to persons affected by the bandh.

The petitioner also asked the court to direct the government to take appropriate preventive measures restraining the Kannada Chalavali Vatal Party or any other persons from calling a bandh or a strike.
In spite of guidelines issued by Supreme Court in a case of Destruction of Public and Private Properties Vs Andhra Pradesh and others, the petitioner said, all political parties and pro-activist groups continue to call for bandhs.
The only solution, the petitioner said, is to declare bandhs as illegal.

BANDH/STRIKE IMPACT AS CLAIMED BY PETITIONER
Revenue loss for state/centre as transport system comes to a standstill
Studies affected as schools shut down
Daily labourers and workers lose wages.
Patients are kept from hospitals
Pregnant women and critical patients are most affected.
Tourism and small-scale industries are affected
People’s lives
are at risk as bandhs often turn violent

Stay up to date on all the latest Bengaluru news with The New Indian Express App. Download now
TAGS
Kannada outfit