They work with cash management company; money was collected from malls, coffee outlets.

BENGALURU: Security guard of a cash management company was left holding bananas when two other employees, including a driver, escaped with Rs 90 lakh cash from Jnanabharathi on Monday evening. The two accused asked the guard to buy bananas and made their escape when he was away.

The stolen cash was what was routinely collected from various malls and high-end coffee outlets and which the three staffers of CMS Cash Management Company were supposed to deposit in bank accounts of these establishments. 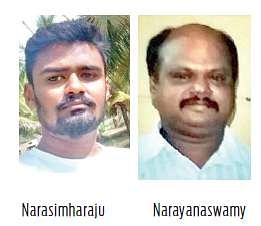 A special team has been formed to nab the accused. The accused are Narayanaswamy, 47, a resident of Vidyaranyapura, and Narasimharaju, 27, of Kamalanagar.

A senior police officer said Narayanaswamy, who works as an assistant, along with driver Narasimharaju and the security guard Nataraj, had collected the cash from super markets, malls and other business centres in Basavanagudi, Rajajinagar, Malleswaram and other localities in a Tata Sumo vehicle belonging to Narasimharaju.

Around 4.45 pm, they were passing by Jnanabharathi Circle when they stopped and asked the security guard Nataraj to buy some bananas from a nearby shop. Before Nataraj returned, the two had fled with the cash.

Nataraj immediately alerted the company manager Raghunath, who approached the Jnanabharathi police and filed a case.

“The accused have been working in the company for seven years and after collecting the cash they used to deposit it into the merchants’ accounts in different banks. The company charges commission from those retailers for this service and we are verifying whether the company had done a background check on their staff and if they had been involved in similar crimes earlier. CCTV footage has been obtained to ascertain the movement of the vehicle and police at the toll gates and borders have been alerted to keep an eye out for the accused”, the officer added.

Preliminary investigations revealed that the accused planned the robbery well in advance as they had discussed this over many phone calls on Sunday. The involvement of security guard Nataraj, a resident of Magadi Road, has been ruled out and the vehicle has been recovered at Madanayakanahalli near Nelamangala.

The vehicle has no GPS system and the company is equally responsible for negligence, added the officer, and that further action will be taken once the accused are nabbed.

We do background checks, says company
A spokesperson of CMS Info Systems Ltd stated in the press release, “We systematically perform comprehensive background checks (including police verifications and reference checks), and compulsory Aadhaar number verifications. We have developed a whistle-blower policy for field staff, and seek to take prompt and appropriate disciplinary actions in respect of any discrepancies in cash balances”.