Eshwarappa H gets BBMP to act on 100 black spots

On his way to and from work and while traveling to various parts of the city, Eshwarappa H, regularly notices mounds of debris from construction and demolition work, dumped in

BENGALURU : On his way to and from work and while traveling to various parts of the city, Eshwarappa H, regularly notices mounds of debris from construction and demolition work, dumped in the open. But unlike others, he does not drive past them, instead he reports them to the city corporation.
So far, he has alerted Bruhat Bengaluru Mahanagara Pallike of 200 such black spots and he says the corporation staffers have responded and fixed “40 to 50 per cent of them”. But Eshwarappa, who works full-time with a civil-engineering consultancy, is still not happy with the corporation’s work. 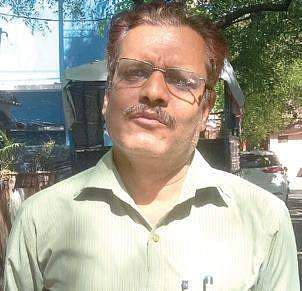 He says that the BBMP does not clean up after itself. “When you go from Magadi to Sumanahalli on the Outer Ring Road and towards NICE road, you will be greeted by mud and dust. This is due to what I believe is a recent road digging work carried out by the BBMP. However, the civic body does not bother to clean it up the mess once work is finished. It is quite a problem or people here especially those riding two-wheelers and people in open vehicles.”

As a concerned citizen, Eshwarappa juggles his work with his social work and always forwards such complaints with regards to such problems to the BBMP through various platforms. “I have contacted the BBMP commissioner through Facebook, forwarded the complaints on various Whatsapp forums where there are BBMP officials and have even written to the BBMP office itself. However hardly anyone responds,” says Eshwarappa.He has not stopped with reporting civic negligence. Eshwarappa recently finished a B.CLIP course offered by B.PAC that aims to make citizens more informed and ensure accountability of authorities.

Worst stretches
Eshwarappa says the worst stretch, that he has encountered, is near Sujatha Theatre on Vattal Nagraja Road in Rajajinagar, where he stays. “The footpath was made here some few months back but the debris arising out of that work continues to be here itself.”  Another area where he has seen mounds is below the Binni Mill underpass. “On this particular area there was some road-digging work and road-laying road carried out. Even as the work was finished the mud from the road digging remained and has not yet been cleared. It is a great problem for motorists,” adds Eshwarapppa.