As constables tried to disperse the gamblers, some of them started an argument with the policemen and began assaulting them.

BENGALURU: Four persons, including a BJP worker, have been arrested by Vartur police for allegedly assaulting two policemen, who went to disperse a crowd indulged in gambling at a public place. The incident took place near Siddapura government school on Monday afternoon. The accused have been identified as Kumar (30), Sandeep (27), Murthy (21) and Muralimohan, all residents of Siddapura. Sandeep is a worker of the BJP. 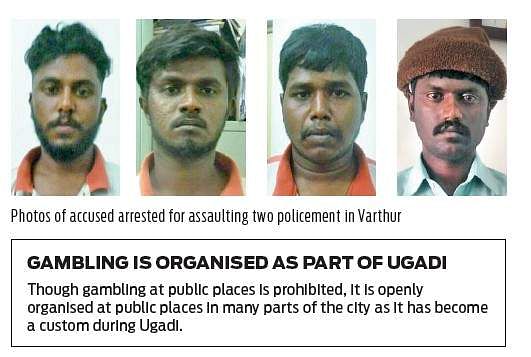 Police said that constables Basappa Ganagera and Sharanabasappa, both of Whitefield police station, went near Siddapura government school around 1.30 pm, following information that several people were gambling at a public place, as part of Ugadi. When they reached the spot, there were around 10-15 persons, most of whom were inebriated. The policemen asked them to leave the place, but the gamblers did not oblige. As the constables tried to disperse them, some of the gamblers started an argument with the policemen and began assaulting them.

“The policemen escaped and informed senior officers about the incident. Based on clues and information from the public, four persons were arrested in the evening. They have been identified by the policemen. We are on the search for other absconding persons, who allegedly instigated the four men to attack the policemen,” the police said. A case has been registered in Vartur police station. Meanwhile, BJP leader and former Deputy Chief Minister said Sandeep will be dismissed from the party for assaulting policemen.

Stay up to date on all the latest Bengaluru news with The New Indian Express App. Download now
TAGS
gambling Ugadi