From now on, it’s gonna be a long drive to Bengaluru's Kempegowda International Airport

With toll collection starting at Devanahalli booth today, it is expected to choke traffic.

BENGALURU: If you are planning to catch a flight out of the city on Wednesday, make sure to leave home a bit early. With toll collection for those headed towards the airport due to start from Monday midnight, there will be traffic snarls at the Devanahalli toll booth on day one. In fact, this could even become a daily problem if cab drivers are to be believed.

Since airport visitors choose to use the expressway one way and the recently opened alternative road for their return journey, escaping the toll, the concessionaire that operates the toll booth has decided to introduce toll collection for vehicles headed towards the airport. 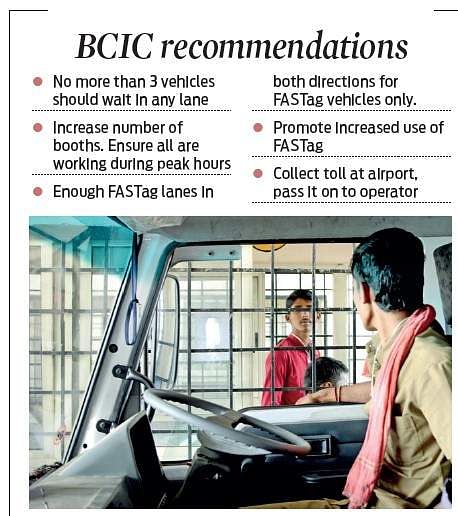 However, this move was met with severe criticism by all, including passengers, who felt that they would have to factor in an additional half an hour to clear the toll booth, adding to the already long commute to reach Kempegowda International Airport.

On Monday, Bangalore Chamber of Industry and Commerce (BCIC) came out strongly against the toll collection and said that the move will aggravate traffic jams, denting the city’s image. The trade body submitted a representation to the National Highways Authority of India and the state government asking that the old practise be restored.

“Time is critical while entering the airport. We always notice long queues during peak hours even though there are more lanes at the toll plaza,” said Ahmedali, former BCIC president.

However, the toll operator said that there is no question of rolling back the move as revenues would take a hit if the current system was maintained. An official working at the toll plaza said, “Everyone will choose to escape paying toll instead of shelling out money during the return trip. The moment an alternative route was made available, this decision became unavoidable.”

The operator however added that to make things easier, there will be 15 booths available for those heading towards the airport. “All booths will be equipped to deal with customers who use FASTag and there will be one dedicated lane for them,” he said.

To this, BCIC suggested that toll collection could be completed at KIA and handed over to the operator which would help prevent delays. “We are not opposed to toll collection, but NHAI must ensure that traffic to and from the airport moves smoothly. The objective should be to ensure that at any time there are no more than three vehicles waiting in any lane at the plaza,” Ahmedali said.

Currently, early mornings and late nights see a lot of jams at the toll booths heading into the city as there is a high volume of flights operating at KIA during these hours.

COVID-19: Singapore in talks with countries like Australia, S Korea to establish 'green lanes' for travel

COVID-19: After two months, public transportation to resume in Tamil Nadu from Monday