BENGALURU:The IPL is a money-churning machine with the cricket board, franchises, players, etc, making fortunes. They may deal in crores, but there is room too for small vendors to make money — selling jerseys, caps, merchandise outside the stadium during match days.Scenes outside the Chinnaswamy Stadium this summer, have provided a brilliant atmosphere, hours before the game begins. If some of them were busy getting their faces painted, the other corner witnessed fans bargaining with roadside merchandise sellers.

In fact, it is these people on the street, who sell jerseys, that makes it easier for the supporters to buy the required things. Even fans are aware of the growing trend of jerseys sold outside and they do not even worry about buying it from the markets.

“We were told by our friends about the roadside sellers. Why should we go somewhere else to purchase when shirts, caps, get our faces painted when everything we need is available within and around the stadium at very affordable prices?” said Sachin, who was set to watch his maiden IPL game from the stands. 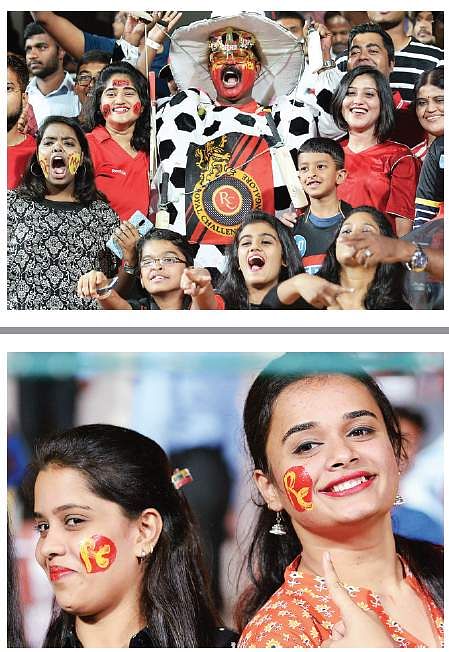 He was enthralled with the buzz created near Cubbon Road, where each and every salesperson, selling bundles of jersey, utter the same words — ‘nimige jersey beka? (do you want a jersey?)’ The cost of each jersey varies from `200-`350, and it all depends on the bargaining power of the fans.The sales people, most often, sell these at `200. However, sales of such jerseys are not just restricted to just IPL.

Football matches in the city also witness a similar craze outside the stadium. “I have been in Bengaluru for over 12 years and the IPL seasons have always helped our business. My friends and I also sell merchandise at the city’s football stadiums on match days, or at our shop in Malleswaram,” said one of the sellers. Some bring their merchandise from Mangaluru to sell here, which helps them make decent money too.

However, at times, especially just an hour before the match commences, they can create an obstacle in the footpath.While the sellers lookout for customers, traffic movement on the footpaths can be problematic. Hence, the police ask them to sell their product on the other side of the road, to ensure smooth traffic into the stadium. But the sellers don’t see it as a major problem.

“If we behave ourselves and avoid creating traffic on the footpath during our sales, the police do close an eye. After all, we are here to help the fans and crowds by selling goods to enhance the stadium atmosphere,” said Ravi, 27, who travelled from Kozhikode in Kerala with the stock.It is the presence of such sellers outside the stadium that helps create a colourful atmosphere during matches.