The death of a pup on Monday, a victim of unethical dog breeding, has opened a can of worms about
the illegal and cruel online sale of pets.

BENGALURU: On Monday, 40-day-old Bagheera, a victim of online pet shopping, died a painful death, sparking rage among pet-lovers in the city. Anushree Thammanna, Bagheera’s parent, recalls getting a call about three weeks ago from a friend about a recently purchased, severely-ill pup needing shelter. Anushree, who offered to help immediately, was unaware that Bagheera was a victim of cruel breeding and online sale. “Every time I carried him, he would search for a nipple. He was suffering from nasal discharge, cried every hour for his mother, needed to be comforted, and fed through a feeding bottle because he wanted to suckle,” Anushree says.

It was only when she started digging into Bagheera’s details, did she find out that he was bought on Quikr for `13,000. “The vet had said Bagheera was battling canine distemper and his survival chances were slim.”Bagheera’s story has sparked outrage on social media with several other pet parents sharing their horror experiences. In fact, Bagheera was one of the reasons why CJ Memorial Trust, Bengaluru, started a petition to protest the online sale of dogs. 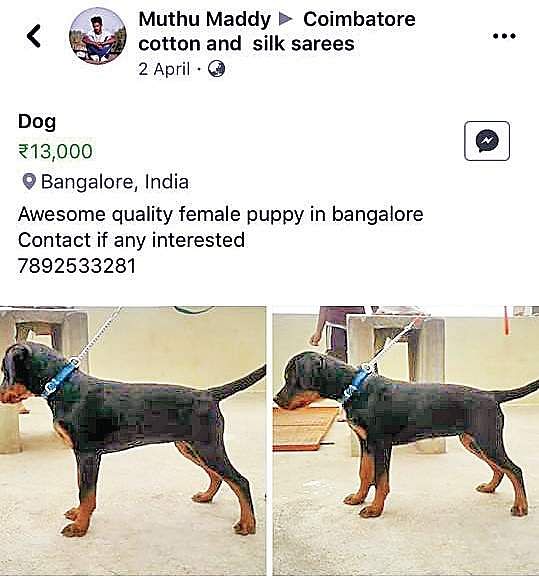 If you scroll down the sites on which dogs for sale are listed, most of them read, “Quality Shitzu puppies for `25,000, Akita puppies for `1.5 to `3 lakh depending on the sex and colour; wholesaler German Shepherds for `12,000 per unit.”

When animal welfare activist Chintana Gopinath found a 22-25 day-old Boxer abandoned in public, she also learnt that the dog was ordered online. His physique was smaller than usual, he had skin issues, poor immunity and kept nibbling at anything he could lay his paws on. “Pups who are ill-treated by breeders suffer parvovirus behavioural issues, nervousness, and are overly possessive of objects. Many times they don’t learn how to use their teeth gently. Often, they die an early death,” Chintana shares.

The main problem, pet-parent Rachel Chenchiah points to, is the lack of checks and balances online. “No one is accountable to the Animal Welfare Board of India (AWBI) rules. Mandates that state that puppies can be sold only after two months of age, after being with their mothers initially for health reasons (to receive antibodies through milk), are completely ignored,” she says.

According to Rachel, female dogs are tied to rape stands, for male dogs to impregnate them. “Then, at the tender age of 1.5 years, she would have given birth to 12 puppies. The mother falls sick and is abandoned by the breeder. On websites, breeders illegally sell these puppies, that are not even 35 days old. They are bought because people are impulsive and want something cute, without being prepared to deal with the health and genetic issues due to bad breeding,”Rachel adds.

When City Express connected with Quikr regarding the sale of pets on their website, a spokesperson responded: “We were recently made aware of dog breeding malpractices and thank the petitioners for bringing it to our attention. We fully support them in eradicating cruelty towards animals and are committed to healthy practices. We are working on doing the right thing.”

Laws should include online sales

Petitioner Priya Chetty-Rajagopal has addressed her demands to AWBI and MoEF to amend the rules; and websites to take down dog listings/groups, namely, Quikr, MarshallPetzone, Dogsindia, Dogbazar.org, Kennelsindia, Indiamart, among others. She points out two basic issues that need immediate attention: “The AWBI under Ministry of Environment and Forest brought out ‘Dog Breeding and Marketing Rules, 2017’, where it is mandatory for breeders to have a license, fulfill requirements, stringent rules of breeding only once a year, ensuring proper nutrition, medical care and adequate space. The rules need a tweak to include online platforms under them. When people buy from breeders physically, they may at least see that the puppy is too young, weak or ill-treated.”

Now we are on Telegram too. Follow us for updates
TAGS
online animal sale of animals