Troubles poured in the form of power outages, uprooting of trees, water logging, traffic jams and unavailability of cabs.

BENGALURU:   Several parts of the city witnessed heavy rainfall on Thursday evening with the rain continuing till late night in several areas in east, central and western Bengaluru. According to the Karnataka State Natural Disaster Monitoring Centre (KSNDMC), around 12.81 mm of rain was recorded up to 8.30 pm across the city. According to the Meteorological Department, rain and thundershowers are likely to occur in the evening till May 14.

The BBMP east zone control room received couple of complaints on water stagnation, causing problems to vehicular movement. This includes roads near Mukunda Theatre and also near Doordarshan Kendra. Water logging was also reported from VV Puram, Basavanpura and Devasandra in Mahadevpura zone as well as in K R Puram near Cambridge college.In Hosakerehalli area, near Dattatreya temple, an electricity pole fell on the road and officials rushed to the spot to fix the damage. Tree fall was reported from Kurubarahalli and near Madhavan park in Jayanagar, according to the BBMP control room. Power cuts were also reported across the city with several complaints of power cuts from East and Southern parts of the city. 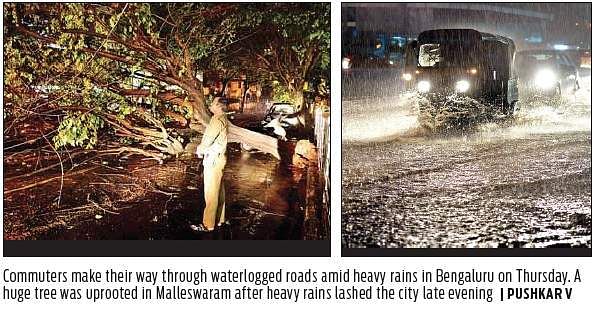 According to the Bangalore Electricity Supply Company (BESCOM), a total of 929 complaints were received in the Bengaluru urban areas between 7 pm and 9 pm. Out of these, 268 had been attended to by 9pm while 661 were pending. Across its jurisdiction, 1,567 complaints were received out of which 908 complaints were pending at 9pm. In Kallambella, in Tumakuru district, heavy rains and wind resulted in the breaking of 20 poles which cut power to the entire area. On Thursday, the maximum temperature was around 34 degrees and by evening, it had dropped to 23 degrees celsius.

The temperature is likely to decrease further by 1 degree with the maximum hovering around 33 degrees and minimum temperature around 22 degrees over the next three days.

Now we are on Telegram too. Follow us for updates
TAGS
rain bengaluru thundershowers