In a stand against bullying and violence, 15-year-old spreads awareness through his cycle yatra

BENGALURU : Maharshi Sanket, a 15-year-old from the city, is taking a stand against the atrocities, hate and crime being seen is the world today. Watching the news and listening to personal anecdotes of those who have fallen prey to bullying and violence, triggered to speak out, by launching a campaign by the same name. The young boy, who has just completed his grade 10 examinations, is not only hosting an art event with five paintings with social messages, but is also going on a cycle yatra from Bengaluru to Mumbai to spread awareness. “After hearing about the recent Kathua incident and several other abuse and bullying cases from friends who suffer silently, I wanted to spread awareness that they are not alone and to encourage them to speak up,” he says.

The exhibition is Sanket’s creative protest, a medium through which he is trying to express himself and spread word about positivity. “I have also put together a team of musicians – Chris Avinash, Ankita Kundu and Sadhu Nityanand – to create a campaign anthem, which will be released soon. A short film is also being made, which will be released later in August,” he tells us. 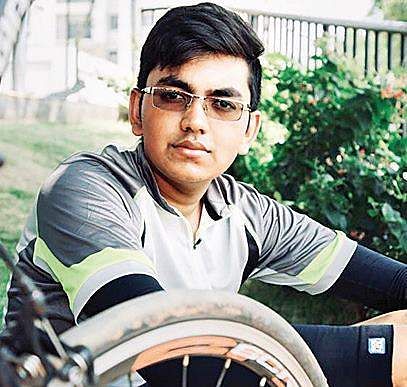 But why cycling? “Cycling is good for both the mind and body, and I enjoy it because it challenges me to push myself. I feel that it is easier to spread a message if one is cycling. It’s a great way to  interact with people,” he says.The teen will start his journey from Cubbon Park on May 21, and will cover places such as Tumakuru, Sira, Chitradurga, Davangere, Haveri, Dharwad, Belagavi, Kolhapur, Satara, Pune, Lonavala, and finally Mumbai and Navi Mumbai. “I plan to travel 70-100 kilometres a day and end my journey within 11 days, by June 2,” he explains. Sanket will be accompanied by art director Sukant Panigrahy, and a social activist to speak on the cause, who will travel in a caravan.

Although crowdfunding has played a role in running this campaign, his parents and friends have showed immense support. “The key message that I’m trying to spread through this is urging everyone to reach out for help,” he says about his campaign, which was conceptualised in the second week of April.

It takes a lot of strength to travel over 1,000 kilometres by cycle alone, and Sanket continues to prep himself for a gruelling journey by working out at the gym and cycling in and around the city. “Keeping fit was a challenge that I had to overcome,” he says. Maharshi hopes that through interactions with several people, he can understand why they don’t speak up and what possible solutions to this problem are.