Artist finds space to display his work after seven years

Saju Kunhan, an artist from Kerala, displayed his 30x8 feet canvas titled ‘City of Protagonists’ for the first time at the 2018 edition of Art Bengaluru, at UB City.

BENGALURU: Saju Kunhan, an artist from Kerala, displayed his 30x8 feet canvas titled ‘City of Protagonists’ for the first time at the 2018 edition of Art Bengaluru, at UB City. The art piece was inspired by his first impression of Mumbai, when he visited the city for the first time, in 2011. Since its creation in the same year, the artist wasn’t able to exhibit the painting due to a lack of large exhibition space. 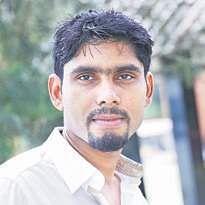 Saju had shifted to Mumbai to pursue his Masters in Fine Arts in Painting from the Sir J J School of Art after a bachelor’s degree in Fine Arts from Government College of Fine Arts, Thrissur. His personal experiences and upbringing in a rural background shaped his lens while viewing the ‘megacity’. “After my 10th grade, I worked in a garage for two years where we were required to paint the cars and polish them until we saw our own reflections on them. When I reached Mumbai, I tried to see things from the point of view of an automobile’s headlight. Myriad views of the city are reflected from it,” says Saju.

He set out with his camera and spent the next three months in the city, travelling and capturing pictures of the city’s architecture, slums, trains, dabba wallas, and factories. Elements in the photographs were then transferred to a 30x8 feet canvas, using oil paints. Distortions and twists enhanced the spherical perspective to create an abstract artwork. “When you are new to a city, you are blinded by curiosity. My paintings are two-edged metaphors which portray both positive and negative aspects; I try to showcase the dark aspects of life through a shiny, polished surface,” he says.
Disappointed that the painting could not be displayed, Saju shifted his artistic style from what he describes as a ‘playful use of colours’ to dark hues on wooden panels.

Abhishek Naidu, curator for Art Bengaluru 2018, says that though the work pertains to Mumbai, the painting is relevant to any cosmopolitan city, including Bengaluru. “There are people coming into the city from across the country. Often, they come from small villages, like Saju, to follow their dreams. Their first impression of a large city is quite significant to them. The artwork is a reflection of that; it is an artwork that would connect with a lot of Bengaluru’s new residents,” he says. The installation process of the painting was quite a challenge for the team at Art Bengaluru. “A lot of effort went into making sure that the painting reached Bengaluru, and that it was framed perfectly,” he adds.

Saju is currently working on a commissioned project for a hotel in Bengaluru. It is a 18x6 map of the city based on his recent artistic process of transferring his ideas on wooden panels. At present, the artist lives and works in Mumbai, his home since 2011.