Gurudas Shenoy’s passion for landscape was born in a beautiful town tucked between the Western Ghats and the Arabian Sea.

BENGALURU: Gurudas Shenoy’s passion for landscape was born in a beautiful town tucked between the Western Ghats and the Arabian Sea. The lush green paddy fields and azure rivers were the subjects of a young Shenoy’s watercolour paintings.An appetite for travelling, Gurudas Shenoy’s muse, has led him across India and Europe. At present, his paintings amount to a visual travelogue. A sketchbook with notes scratched on the back accompany him on his journeys. Not only the beauty but also the character of a place leaves an impression on the artist quoting an example of the bustling entrance of the church in Shivajinagar. 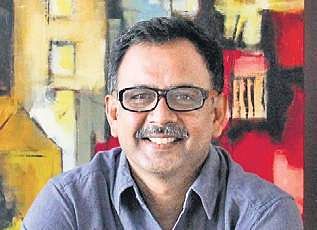 Charcoal drawing marks the beginning of the artistic process. It is the step where ‘the whole painting is composed’. Overlapping the charcoal, strokes of bright oil paints give way to a play of textures and light. Shenoy says, “My strength is in my colours. I use a very colourful palette”. The paintings are not premeditated nor calculated, the process is of discovery. “In the studio, I spend a lot of time observing the painting. There is a conversation between the work and me. I build up the entire story and watch it. It is a continuous process,” explains Shenoy. With his favourite music on, the artist spends at least five to six hours continuously working on two or more paintings simultaneously. Driven by spontaneity, the 20 by 5 oil painting ‘Recounting Memories’ took a mere ten days to complete.

Pointing to a painting of bright vermilion-textured houses, that blend yet juxtapose the grey, lightly painted skyscrapers in the background, Gurudas says, that in this piece, he attempts at capturing the durability of buildings that stand witness to generations. Challenges are none for the artist who says, “Artists never think of what will happen after he paints. It does not matter whether it sells, all that matters is the relationship between the canvas and himself.”

Shenoy’s draws his inspiration from experiences and people. The artist says that his father, G S Shenoy has played an instrumental role in influencing his work. Apart from these, cultural experiences from his hometown such as Yakshagana continue to inspire his artistic style. “In my paintings, there is light and you don’t know where it is coming from,” adds Shenoy, when talking about the ‘surprise’ element in his paintings.

There has been an evolution in the visual language of the artist. Gurudas says, “I’m letting myself go. I’m letting my art take me anywhere. I do not want to control myself.”

The exhibition will display 50  of his paintings at Sublime Gallery, UB City till November 28.