In a first-of-its kind initiative, an apartment in Banashankari 2nd Stage has installed a solar power plant which has cut down their electricity bill by a whopping Rs 1.5 lakh every month.

BENGALURU: In a first-of-its kind initiative, an apartment in Banashankari 2nd Stage has installed a solar power plant which has cut down their electricity bill by a whopping Rs 1.5 lakh every month. In what could be an example to other Resident Welfare Associations (RWA) in the city, Brigade Petunia is now running its common area with solar energy.

While the installation of 296 solar panels across 9,600 sqft of roof space was done a year ago, by the members of the association, the project was commissioned only two months ago. "We used to spend nearly Rs 1.5 lakh on a monthly basis towards our electricity bill. Ever since we installed a 96 kilo watt peak solar power plant, we are saving 85 to 90 per cent of that cost. 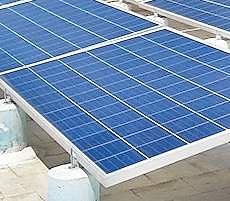 The association claims to be the only RWA in Bengaluru to have the largest solar power plant on their apartment rooftops, but they say that the process has not been easy. In October 2017, they began by collecting funds from residents, researching on the right kind of solar plant, working out finances, but were delayed because of approval from the government. Nikhil, in conjunction with other members of Bangalore Apartments' Federation, worked with the state government, including Bengaluru Electricity Supply Company (BESCOM) to get go-aheads quickly.

"When we started off, the process to get an approval from the Chief Electrical Inspector to Government (CEIG) was long drawn out. During the state elections, we got no work done with BESCOM for three months. Two months ago, it was finally commissioned," says Nikhil, further adding, "After BAF started working with the government, they recently amended the rule. Now solar power plants producing less than 1 mega watt do not need CEIG approval. The process will be easier for other apartments who wish to implement this."

After availing a 30 per cent subsidy from the Solar Energy Corporation of India (SECI), their investment to install panels on rooftoops of eight blocks, worked out to Rs 52 lakh. The apartment chose a capital expenditure model, which meant that they made their own investment. "This works out cheaper in the long run since the per unit charge for electricity from BESCOM is Rs 7 to Rs 8 per unit. This comes up to Rs 4.5 to Rs 6 per unit. We chose an Israeli company's solar power plants, where the energy output is high. The pay back period will also be shorter," Nikhil adds.