Over 1,000 ‘Thambis’ of Madras Sappers step in to clean Ulsoor lake again

Ulsoor Lake is used every day by the Madras Sappers for training purposes. As a result, the army steps in whenever the lake needs to be rescued from garbage and weeds from time to time.

BENGALURU: On Wednesday morning, over 1,000 ‘Thambis’ of the Madras Sappers waded into the waters of Ulsoor lake and fought a war against an invasion, and won. The battle was against the water hyacinth — an invasive species of plant — which was threatening to take over the lake. The lake was slowly being taken over by weeds and hyacinth in the absence of any action by the Bruhat Bengaluru Mahanagara Palike (BBMP).

Residents, tired of complaining to the BBMP, were overjoyed to see help arrive. Ulsoor Lake is used every day by the Madras Sappers for training purposes. As a result, the army steps in whenever the lake needs to be rescued from garbage and weeds from time to time. 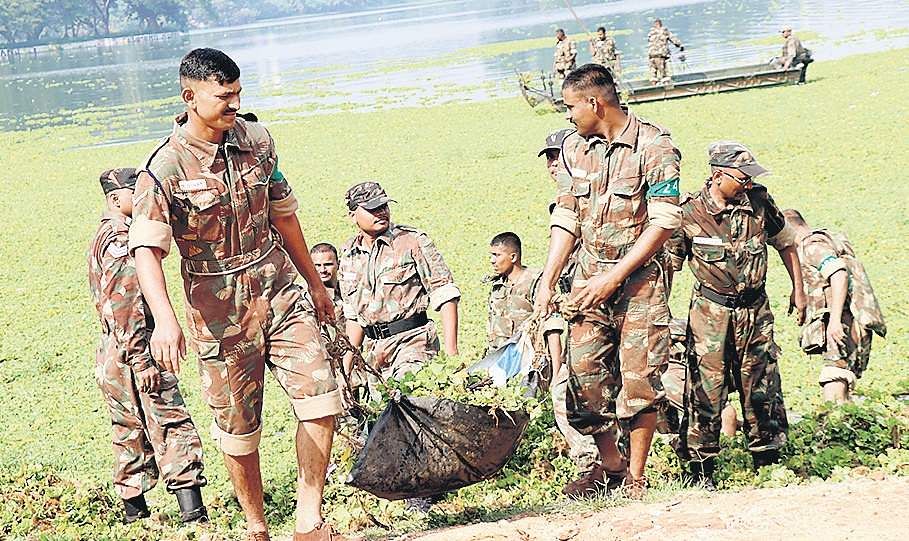 “The BBMP doesn’t listen. When we spoke to them, they said that a private organisation is in charge of the area. But, the latter stated otherwise,” said Poonish Mehra, from Halasuru, adding, “The area is a breeding ground for mosquitoes, and we are praying we won’t see the death of hundreds of fish like in 2016.”

The plants, which were seen on the western and southern sides of the lake, opposite RBANMS College, were removed by the Sappers. Dressed in fatigues, the Sappers pulled out the plants with their bare hands. “The stench and filth is overpowering by the sides of the lake where people dump garbage. The soldiers fish out plastic dumped along with household rubbish, rotting vegetables, and sometimes, hospital waste. It is not an easy task. It has been 10 months now since the MEG men took up the cleaning operation at Ulsoor Lake,” said a statement from the MEG.

However, the MEG has also sent out a clear warning to those who dump garbage in the lake. It reads, “People should understand that it is not the business of the Army to clean garbage. Civil authorities order the cleaning of the lake every time, but little happens on ground. It is finally left to the brave soldiers to safeguard not only the nation’s frontiers, but its precious resources too.”

Speaking about the harmful effect of hyacinth and other garbage, environmentalist Yellappa Reddy, said that nobody can drink the water and no aquatic life would survive in this condition. “With lead particles in the water, it can, in turn, affect the residents nearby, leading to kidney problems and memory loss,” he says. Ramprasad, founder, Friends of Lakes, says the plants must be controlled and a barricade must be erected to prevent it from spreading to the main lake area. He also said that chances of this contaminated water affecting the groundwater are high.

BV Sathish, chief engineer for lakes, BBMP, said earlier on Wednesday morning that weed removal will start today, and will take another 15 days to complete. BBMP corporator for Halasuru ward, Saravana, was unavailable for comment.

Now we are on Telegram too. Follow us for updates
TAGS
Ulsoor lake Army Snappers Garbbage