Karnataka State Reserve Police to get into action during disasters

Each battalion has a sanctioned strength of 1,100 policemen, including 22 sub-inspectors, 90 Assistant Reserve Sub-inspectors, 10 inspectors, three deputy superintendent and one commandant.

BENGALURU:  Hitherto perceived as grossly under-worked or underutilised, the Karnataka State Reserve Police (KSRP) will have an enhanced role to play from now on, mainly in emergency situations, including search and rescue during natural or man-made disasters. The KSRP personnel have been initiated on an intensive multi-skill training to make the force and its men more useful.

In Karnataka, there are 14 battalion of KSRP, of which four are in Bengaluru. Each battalion has a sanctioned strength of 1,100 policemen, including 22 sub-inspectors, 90 Assistant Reserve Sub-inspectors, 10 inspectors, three deputy superintendent and one commandant. However, 800-900 policemen are working in each battalion, and are deputed to places when there are law & order issues, election time, or sent to naxal-infested areas. 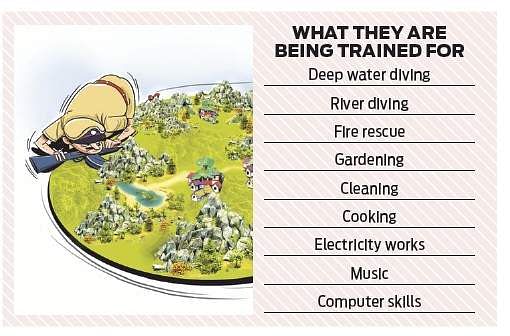 Additional director general of police (ADGP), KSRP, Bhaskar Rao, told The New Indian Express that unlike in earlier times, the personnel joining the KSRP are graduates and double graduates. The young team is enthusiastic and is eager to learn many new skills. “So, we need to utilise their human resources. But, when there is no law & order issue, they just sit inside vans most of the time.”

Rao said disaster management training like river rafting, deep water diving,  and fire rescue are being imparted to the KSRP personnel. “These are skills needed during disaster management and emergency services. Multi-skilled police personnel are an asset to our department,’’ he said, adding that apart from training them in these there would also be skill training given to them in gardening, plumbing, electrical repairs, music, vehicle repair, electronic repair, computer training and cooking.

Rao said the personnel are also being sent to mortuaries regularly to make them accustomed to the sight of dead bodies, which they may have to deal with during times of natural or man-made disaster. “During disasters, their services would include removal of dead bodies, some of which can be in a decomposed state. They have to get used to it, otherwise we have seen many panic at the sight of dead bodies. Besides, the personnel will also be sent to clean up lakes,’’ he said.

Now we are on Telegram too. Follow us for updates
TAGS
Karnataka State Reserve Police Naxal-infested areas Disasters