IIMs may give its best graduates direct entry to PhD

However, a decision regarding this will be taken after consulting the University Grants Commission (UGC) and All India Council for Technical Education (AICTE).

BENGALURU:  The Indian Institute of Management-Bangalore (IIM-B) has proposed direct entry of high-scoring graduates of the premier Indian Institutes of Management (IIMs) to PhD programmes. According to sources, the proposal is likely to get a nod from the Ministry of Human Resource Development (MHRD). 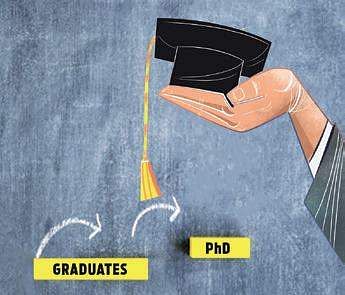 “A meeting regarding this was held last week by MHRD, which felt that exceptional students who have completed four years of graduation course with an outstanding CGPA (cumulative grade points average) of 8 should be directly admitted to PhD programmes by IIMs. The duration for the PhD would be four years,” a source said.

However, a decision regarding this will be taken after consulting the University Grants Commission (UGC) and All India Council for Technical Education (AICTE). The proposal made by some of the IIMs was that B-schools should be allowed to admit students directly to doctoral programmes once they graduate, like how the Indian Institutes of Technology (IITs) are allowed to do.

G Raghuram, IIM-B Director, told The New Indian Express, “We already admit such candidates to our fellowship programmes, which are equivalent to PhDs.” However, IIM-B is now unable to grant them a PhD degree.Initially, the 20 IIMs were supposed to adhere to UGC norms on the award of PhD degrees. As per UGC rules and regulations, only candidates with a master’s degree are eligible to pursue PhD.
Sources in the HRD said it is considering the approval after looking at the PhD programmes offered by some IITs, which are empowered to award degrees.

It must be noted that under the IIM Act, 2017, the institutes too have been allowed to award degrees.
However, MHRD has also noted that IIT-Delhi, for example, has prescribed a minimum time period of three years for PhD for individuals possessing a degree other than a masters or equivalent. “For students with a four-year graduation, the minimum duration will be three years. The duration for completing PhD course for those having a masters degree is two years, so similar rules have to be followed by IIMs,” an official said.

Now we are on Telegram too. Follow us for updates
TAGS
Indian Institute of Management-Bangalore PhD programmes IIMs