For the first time since 1989, the North-East monsoon will not reach Karnataka in October.

BENGALURU: For the first time since 1989, the North-East monsoon will not reach Karnataka in October. The prolonged dry spell in the second half of October has resulted in extreme temperature fluctuations in Bengaluru and other parts of the state. While the maximum temperature in the city on October 30 was about two degrees Celsius above normal at 30.1 degrees Celsius, it recorded a minimum temperature of 16.6 degree Celsius, the lowest for October since 2008. While Bengaluru and parts of south-interior Karnataka are expected to have some relief with the NE monsoon expected to set in in the first week of November, other parts of the state are likely to record higher temperatures owing to the prevailing drought conditions.

Speaking to TNIE, CS Patil, director of India Meteorological Department, Bengaluru, said that several parts of the state were seeing above normal temperatures. According to IMD's daily report for Tuesday, maximum temperatures were above normal - a variation of 1.6 - 3.0 degree Celsius - at most places over Central and many places over South Interior Karnataka. 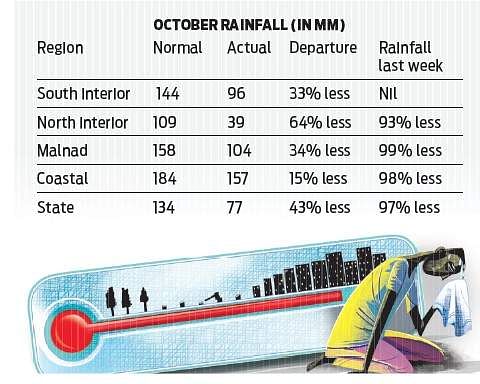 A few places in central and isolated places in south-interior Karnataka recorded temperatures which were 3.1-5.0 degree Celsius above normal.While maximum temperatures soared, minimum daily temperatures also dipped resulting in higher weather fluctuations. According to Patil, Bengaluru recorded the lowest temperature for October in a decade — after recording a minimum temperature of 16.6 degree Celsius.
G S Srinivasa Reddy, Director, Karnataka State Natural Disaster Monitoring Cell, said such delays are very rare. "We haven't observed such a delay since 1989 ... the monsoon should have set in by second week or latest by third week (of October)," he said.

According to the forecast, NE monsoon too is expected to be below normal affecting the late Kharif crop and sowing of Rabi crop. While there are active systems in the Bay of Bengal as NE monsoon advances to south India, easterlies have been quite weak this year owing to the absence of low pressure areas. They are also not strong enough to bring rain to north-interior Karnataka, he said. The state had suffered severe dry spells in 12 of the 16 weeks of SW monsoon season.