Selfie? no please, can i get an autograph instead?

BENGALURU: Bengaluru-based 21-year-old Vijay Felix prefers taking autographs to clicking pictures with celebrities. He says pictures are not that big a deal. “When I click pictures with cricketers or other celebrities, it sure does create memories for a lifetime. I feel extremely happy. But when I get their autographs, I feel happier as I can gift them to my friends and family. I can get them signed in the name of the person I am gifting it to,” he says and that’s why, he started taking autographs from cricketers and other celebrities since 2015.

He has 10 autographs of Sachin Tendulkar, 15 of Virat Kohli and 8 to 10 of M S Dhoni. Felix get them signed not just on papers or pictures but also on cricket bats, balls, jerseys and used stumps. He has more than 120 miniature bats, 26 jerseys, 6 to 10 caps, 30 balls and over 200 pictures autographed by different cricketers. He has collected so many of them that he stores them at his grandfather’s house in Bommanahalli. He adds that his family is happy and supportive of what he does. “They feel happier when they see me with Tamil celebrities as they are more familiar with their faces,” he says.

The first autograph he collected was of cricketer Shikhar Dhawan. “I have met him about 30 times after that. He’s nice and a grounded person,” he says. Felix has always been in love with the sport. He used to play at the state level in the under-19 category and that’s how he happened to start meeting cricketers. He says, “In 2013, the Indian cricket team needed ballers to help them practice. That’s how I was called in. I got to enter Chinnaswamy stadium for the first time and meet all the cricketers. I even saw their match against Australia in November 2013.” He started collecting autographs in 2015. 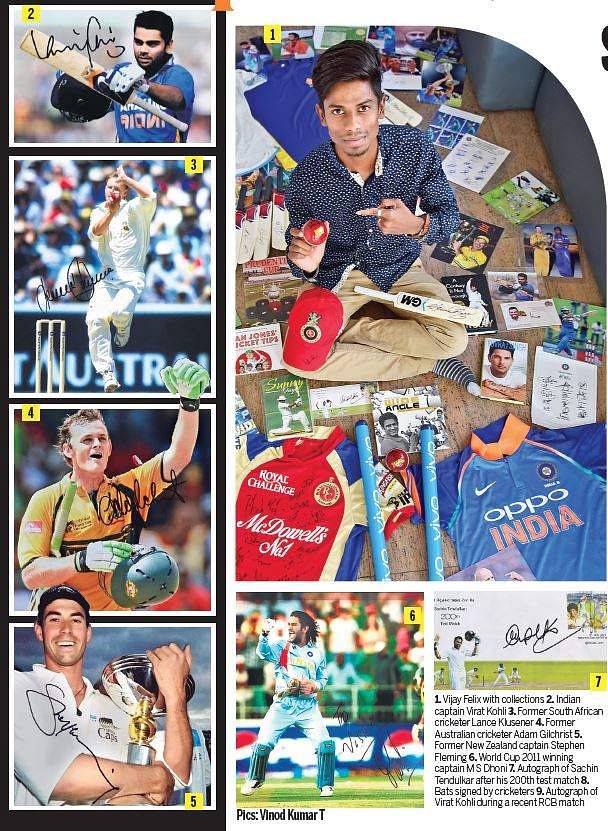 Later, one of his friends added him to a WhatsApp group called ‘Autographs Collector Worldwide’ which has over 246 members from across the globe who collect autographs of prominent people. The members help each other out to get autographs of celebrities in their countries. That’s how Felix also sourced an autograph of Jackie Chan from a friend in China. But Felix prefers to collect them personally. He says, “90 per cent of the autographs I have are collected by me. I like to meet the celebrity in person and get autographs myself.”

Felix is now a known figure among many cricketers. He says he knows the entire cricket team that played in the 1983 World Cup. He often visits their home and collects their autographs. “I know Balwinder Sandhu personally,” he says. Felix has also been collecting autographs of film personalities since eight months. He has autographs of celebrities like Puneet Rajkumar, Shivrajkumar, Darshan, Yash, Dia Mirza, Akshay Kumar, Jacqueline Fernandes, Shriya Saran, Tamanna Bhatia, Kajal Aggarwal and Shruti Hariharan. The class 10 graduate now works in the field of celebrity management and corporate events. He says knowing celebrities has been an added advantage. “When I approach the celebrities for events, they take better quotations from me since they know me,” he says.