Nemat Sadat,the first native from Afghanistan to have publicly come out as gay, speaks to CE about his debut novel and the future of the LGBT+ genre in the country

BENGALURU: Nemat Sadat is currently based in the USA and has recently penned his debut novel, titled The Carpet Weaver. Following the pattern of a Bildungsroman, the book follows the life and story of Kanishka Nurzada, the son of a carpet seller, who falls in love with his friend Maihan. The two friends are forced to keep their love for one another a secret since they reside in Afghanistan, where homosexuality is a crime punishable with the death penalty. Excerpts from an interview:

What was your trigger for writing the book?
Barack Hussein Obama was the trigger for me to start the book. It was June 3, 2008. I was living in Cambridge, Massachusetts and was pursuing a Master of Liberal Arts degree in Journalism at Harvard University. News broke out that Obama had secured the primary democratic nomination. I was so energised and figured if a biracial black man can come this close to become the Commander-In-Chief of the US and the leader of the free world, then I too could write a novel—a novel that was bottled up inside me for years prior to my penning the first word. The very next morning (after the primary election) my life changed forever, I walked to a Starbucks and began writing the novel. Eleven years later, the fiction project I started would get published in book form as The Carpet Weaver. 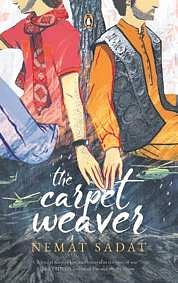 You started writing the book in 2008 but published it this year. What took you so long?
The past decade has been a tumultuous time in my life. I’ve struggled trying to escape life of repression—trapped in the shadows and the closet—and trying to become self-sufficient.  The Carpet Weaver is a wildly ambitious novel, in terms of richness of scope and setting, the multitude of themes and through lines, and the complexity of character and plot. It required a lot of trial and error for all the moving pieces to neatly fall into place. Also, the first five years, I made very little progress since I was going to school and working full-time and had very little time and energy to learn the craft of fiction and get into the creative writing flow. The turning point was 2013. I had returned to Afghanistan the year before and was able to see remnants of the Old World Kabul of the golden age of the “lost paradise” that I wrote about. So living in Afghanistan and breathing the same air stimulated my imagination and helped me colour in the draft. It was also the same year I had come out gay and start my campaign as an LGBTQIA rights activist. And having this burden lifted, of keeping my secret for so long, helped me. I could concentrate my efforts on my creativity. And that also happened to be my second-year in the low-residency master’s degree in creative writing that I was pursuing at the University of Oxford and for my thesis, my thesis advisor, Amal Chatterjee, expected me to write the last section of my book and complete a full manuscript. Once I had a solid draft, I started pitching my novel to literary agents in January 2015 and spent the next several years piling up rejections. And during this time, I continued to rewrite the book. After 450 rejections by literary agents in the US and some in the UK, I decided to give India a try. In my search, I found out that Kanishka Gupta was a top literary agent in Asia and submitted my query letter to him in February 2018. He offered me representation and the rest is history.

What was the hardest thing about writing this book?
Kanishka’s coming out as a gay to his mother was hard for me write about. I had procrastinated in writing this scene since it was fraught with painful memories of me rekindling my own painful coming out to my parents. I didn’t think I could separate myself from Kanishka in writing this scene. Overall, the hardest thing was harmonising the good, bad, and the ugly in the story. To shine light in the
darkness of my novel, I had to capture the beauty of life amidst all the ugliness. Kanishka’s journey is seeped in identity crisis, religious conflicts, and so many horrifying aspects of the human world so it was incredibly challenging to have Kanishka confront so many issues and still convey moments of serendipity in an authentic manner.

Do you think books in the LGBTQIA+ genre are gaining importance in India?
The moment is ripe for LGBTQ+ genre to undergo a Renaissance. India has led the way in Asia and much of the world by depicting LGBTQ+ characters in fiction for decades now. But these representations of the queer community were often minor characters and too often the portrayals limited to same-sex lust. There hasn’t been a major Bildungsroman about an LGBTQ+ Indian character. But now that India is a country in transition on LGBTQ+ matters the moment is ripe for an emergence of this genre and for all genres of fiction to include LGBTQ+ characters in leading roles.   That’s one of the reasons why my book has received such a warm reception in India. Indians are hungry for LGBTQIA
characters featured prominently in the leading roles. The release of my coming-of-age novel coincides with the coming-of-age of the LGBTQIA in the Indian subcontinent. Penguin Random House India acquired my novel literally days before the Indian Supreme Court overruled Penal Code 377, officially legalising gay sex and more recently in Bhutan, where The Carpet Weaver is also sold and distributed, the lower house of parliament has taken the first step to pave the way for decriminalising homosexuality. As more LGBTQ+ people in the region come out and gay rights goes mainstream,it’s inevitable that there will be growing market demand for books that represent the queer community.

Are there any more books by you in the pipeline?
I have three books in the pipeline—all of which deal with LGBTQIA characters and themes. I have already started work on a second novel, which is a cross-genre literary novel that will appeal to readers of dystopian speculative fiction. I’ve also written a rough draft for a memoir titled Sacred Cow of the Netherworld: A Memoir of a Gay Afghan Refugee. I’m torn as to which book should be released next. Do I want to solidify my career as a novelist first or reinforce my political activism by sharing my coming out journey and rise as a leader in the LGBTQIA community?

Now we are on Telegram too. Follow us for updates
TAGS
LGBTQIA