Land of the bravehearts, Kodagu soldiers on

Once the heroes, the number of people from the district in the Army has gradually fallen, but steps
are being taken to groom youngsters

MADIKERI: Known as the land of warriors, Kodagu district has contributed largely to the Indian Army. While there used to be at least one person serving in the Army from every family in Kodagu, the number has gradually decreased.“The number of youngsters attending direct recruitment for the Indian Army has decreased in Kodagu and this number is seeing an increase in North Karnataka. However, there are still a considerable number of men and women hailing from Kodagu who have attained high ranks in the Indian Army,” says Kayapanda Shashi Somaiah, a writer based in Madikeri.

He adds, “Currently, there are over 100 men from Kodagu in the Indian Army and are designated with high ranks including that of Rear Admiral, Lieutenant General, Training Commando and so on. Apart from this, there are nearly ten women from this district who hold ranks of wing commander, major and captain.”

Nevertheless, the number of soldiers from the district being selected in direct Army recruitment rounds has drastically decreased. “The recruitment process has become stringent. Along with being physically fit, aspirants are required to pass written tests that are either in Hindi or English. Also, the education qualification plays an important role in the selection process as today’s soldier is not just required to load a weapon and fire. He has to be well-versed in Science and Mathematics as he must be able to use advanced technological machines. Even in the recent surgical strike, High Altitude High Operation (HAHO) was followed and the soldier was required to know the proper ground reference and other technical information,” explains Major Nanda Nanjappa (retired).

He goes back in time and recalls how he had helped many youngsters from Kodagu join the Army during his service. “A family had asked me to help their son join the Army. I had taken this boy along with me and he used to work at the Army kitchen. While he wasn’t paid any salary at the beginning, he gradually attained a job there,” recalls Major Nanda. But this cannot be done today as he says, “There are no strings to be pulled now.”

Lieutenant Colonel Geetha M (retired) states, “In 2017, during the recruitment process that took place in Kodagu, 900 candidates applied for the selection process from the district. However, only 12 were selected among them. Since physical activity is less these days, the applicants seem to have lost in the selection process. Also, the overall outlook of parents and kids has changed. While a few years ago, ex-army men’s children always joined the Army, it is not the scenario today as there are lot many job opportunities and job security. A fresher in IT sector gets paid nearly Rs 40,000 and this is an easier job compared to joining the Army. The change in lifestyle in the once agriculture-based district has resulted in a paradigm shift.”

Sanju, a student of Field Marshal KM Cariappa College had appeared for Army recruitment selection this year. He is disappointed over not being able to crack the test and says, “I failed in the running test as I could not complete 1,600m in 5.45 minutes. However, I will appear again for the exam next year.”

Darshan Bopaiah, a youngster working at a resort in Madikeri, was an Army aspirant and he is the son of an ex-army man. He settled in for a much easier job as he explains, “I used to be fascinated with the stories my father narrated while he worked at the Army. While I was looking forward to joining the Army, I could not crack the written test and after that I left the dream of joining the Army and tried other jobs.” 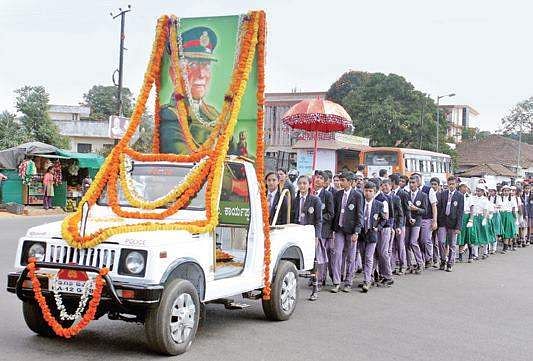 Colonel Kandrathanda C Subbaiah (retired) opines that internet has made youngsters lazy and has resulted in them opting for soft jobs over the Army. “Joining the Army was pride for people of Kodagu and they joined it by choice. While Defence was the number one choice for them, the scenario has changed. The increasing opportunities in soft jobs – that do not require physical or mental alertness -- is being opted by youngsters. While the numbers in Indian Army from Kodagu district has reduced, the youngsters from North Karnataka are increasingly joining the Army,” states Col Subbaiah.

Steps being taken to encourage youngsters

War Memorial at Balugodu in Virajpet Taluk has names of all martyred soldiers of Kodagu. The memorial invokes a spirit of patriotism and is aimed at encouraging youngsters to join the Indian Army
General Thimmaiah Museum (an ongoing project at Madikeri) will retell the story of one of the greatest Generals of the Indian Army.

A few reasons for decreasing numbers

The recruitment process has become stringent. Along with being physically fit, aspirants are required to pass written tests that are either in Hindi or English. Also, the education qualification plays an important role in the selection process as today’s soldier is not just required to load a weapon and fire.
— Major Nanda Nanjappa (retired)

Now we are on Telegram too. Follow us for updates
TAGS
Kodagu Indian Army